2K Sports shows us a new trailer for NBA 2K18

The game is already available on PC and consoles.

2K Sports presents to us a new trailer for NBA 2K18, the return of saga sports. On this occasion it does accompanied by the song “Babylon” of Ekali with Denzel Curry. 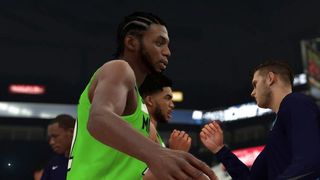 remember that this issue has the comments in Spanish of the journalists-Antoni Daimiel, Sixto Miguel Serrano and Jorge Quiroga. In the comments in English, the legendary Kobe Bryant and Kevin Garnett will sit behind the microphone to bring their expertise to the broadcasts.

also Incorporates equipment legendary: the best players that have passed through each of the 30 teams, together for the first time in combined historical of each franchise. Competes with them in Play Already and check once what team has the best stars of all time.

Among its new features is The Neighborhood, a game mode in which we forge our legend: competing in the courts in the Neighborhood you will join the Pro-AM circuit, or explore the shops and streets in the new open environment of the neighborhood.