An announcement of his future tour includes a character in the title.

Taylor Swift has returned, and has done so with a single under the arm. But beyond its new theme, the singer it has also become the object of the present-day video game with a curious incident related to one of their spots officers face in their future tour and to purchase tickets in Ticketmaster. The reason? The curious resemblance with the indie game Night in the Woods.

Night in the Woods is a curious title indie adventure that takes us, with great emphasis on the narration and the dialogues, a magical world in which players will have to get under the skin of Mae Borowski, a girl who, after graduating from college, he returns to his home in Possum Springs, a small and dilapidated village. With a special design, in the indie game for PS4 and PC, all the characters are cats and other animals. And one of them seems to have been cast in the above-mentioned spot. 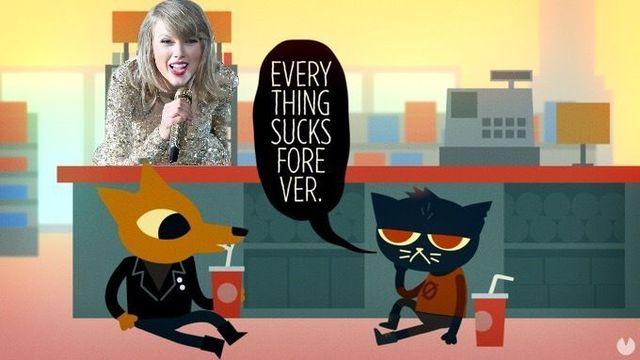 One of your managers has been aware of the obvious similarities of design and has posted it on Twitter, making a comment jokingly about what a canon of the situation. The color and the shape of the cat that can see in the ad are similar to those that the looks of the protagonist in the game, something that has even sparked the ire of the fans at the game. While it is not for both, and even the authors have taken quite laugh about the subject, perhaps you should sing to Taylor that ‘Out of the Woods’, no?