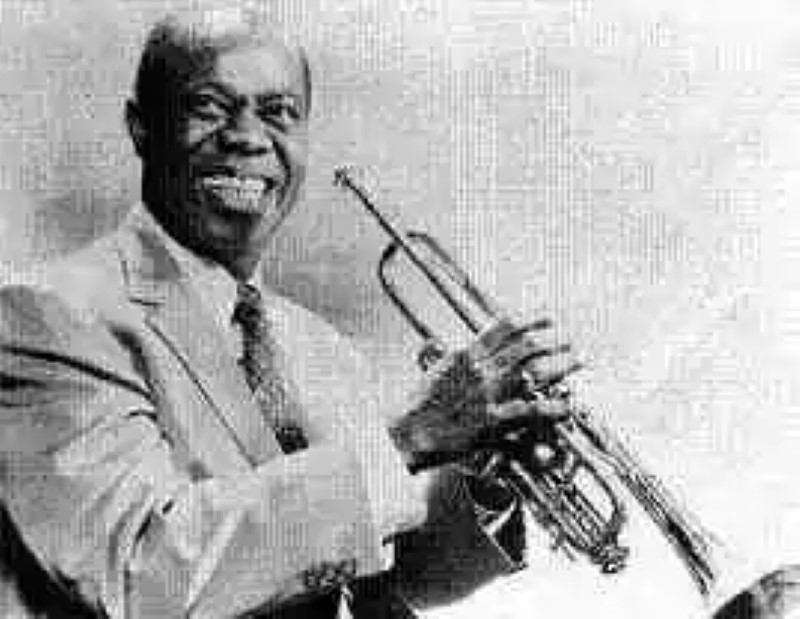 African-American musician, trumpeter and singer, listed as one of the most charismatic and talented figures in the jazz scene, taking this musical genre out of its salon music status to turn it into true folk art.

Known by his nicknames Satchmo, Pops or Dippermouth this musician stood out for his unique improvisations. He is also considered the creator of the essence of Jazz singing. Today, numerous critics agree that his contributions to Jazz have not yet been fully understood, being of profound and invaluable reaches.

Many of his pieces are very popular today, being considered true classics, many of which have been included in numerous films.

Louis Armstrong was born on August 4, 1901, in New Orleans, United States, to a very poor African-American family, thus becoming the son of William Armstrong and his partner Mery “Mayann” Albert.

However, his father abandoned his family, which further exacerbated the economic situation. His mother left him with his younger sister in the care of his grandmother Josephine Armstrong, while he worked. Under this socio-economic situation and immersed in a difficult area, Louise did not take a while to get into trouble.

Between the back and forth of the reformatory he learned to play the bugle, joining the band New Orleans Home for Colored Waifs, in which he demonstrated a great musical talent, which earned him the recommendation of the director of this social institution, Joseph Jones, to learn to play trumpet.

It is that time luck would also lead him to work with the Katnofsky, a family of Jewish immigrants of Lithuanian origin, who treated him as one more of his family. Even Mr. Karnofsky bought him his first trumpet. According to biographers, Armstrong would run a star of David for the rest of his life, in memory of this family.

In 1914, at the age of thirteen, he began working in the Storyville cabarés, where he met Joe King Oliver, who became a true father. Four years later, Armstrong had already made a reputation.

In 1919, he was hired by Kid Ory, conductor, which led him to play in several orchestras, some of which toured through the southern rivers, which constituted a real university. In 1922, he left for Chicago, where he joined as second cornetist for the Creole Jazz Band, the best swing band during the 1920s. This opportunity would earn him the admiration of the audience, quickly becoming a star of the jazz scene.

In 1923 he recorded with the Creole Jazz Band his first record production, which included some of his solos.

The following year he married the pianist, Lilian Hardin, who encouraged him to go his way. He soon left for New York, where he joined the Fletcher Henderson Orchestra. At that time he left the bugle.

On 29 September 1924 he made his trumpeter’s debut at the Roseland Ballroom. The following year, it had already caused a real revolution in the blues genre.

From then on he had the opportunity to participate in several bands, in different cities, among which are the Lil Orchestra, as well as the two groups founded by him in Chicago, during 1925: the Hot Five and the Hot Seven, in which he performed pieces that became true jazz classics.

After a tour of Europe, conducted between 1932 and 1934. Armstrong returns to the United States, where he begins with his manager Joe Glaser, who takes him to work for the next fifteen years with Louis Russell’s Big Band.

In 1940, his manager broke up with Russell and hired new musicians, with which Armstrong would work until 1947. From 1943, after spending years on tour, he decided to settle in Queens. During his career he had the opportunity to share the scene with the most prominent musicians, among them Fletcher Henderson and Ella Fitzgeral

However, the 1940s marked the beginning of the decline of the swing genre and the era of the big bands. Armstrong adapted, so in 1947 he returned to his line-up of six musicians, creating The All Stars, which began with: Jack Teagarden (trombone); Earl Hines (piano); Big Sid Catlett (drums); Arvell Shaw (Bass); Barney Bigard (clarinet) and Louis Armstrong on vocals and trumpet. During this time Armstrong recorded much of his productions, while appearing in at least thirty films.

He was also the first African-American to star in a national radio show. He also won a Grammy Award for Best Male Singer. He finally died of heart complications on July 6, 1971.