Google had hoped to have ready this fall mode Driving in the Wizard of Google to replace Android Auto in mobile, but its delay has meant that the application may not be used by all users.

That is because the application Android Auto disappears when you update to Android 10, or is listed as incompatible as in the Pixel 4. This prevents to be able to launch Android Auto directly from the screen of the mobile. Fortunately, Google has released a temporary solution. 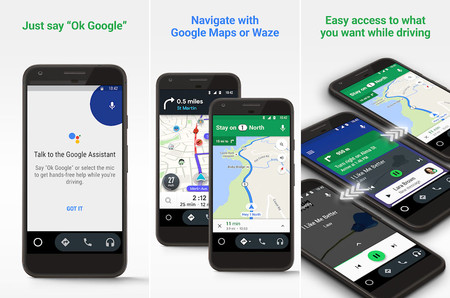 Android Auto for screens of phones is the new application that some devices with Android 10 can download to be able to use since the screen of mobile this interface is designed to be used while we are in the car. If you’re one of the affected that you can’t use Android Auto in Android 10 this is the application you need.

This implementation is a hack temporary while we wait for Google to launch the navigation mode of the Wizard of Google, which was presented the past month of may and is expected to reach the market this summer with Android 10, but it was not so. Neither came out the past month with the launch of Pixel 4 with what still seems to be still waiting.

How it works Android Auto, the mobile interface of Google that is designed to prevent distractions in the car

Android Auto for screens of phones presents no novelty, it is practically a shortcut that allows you to run on Android 10 this launcher of applications for cars, so you’ll be able to use your interface and voice commands to make calls, listen and reply to messages, listen to music or navigate to your destination.

Google Live Caption makes his debut in the Pixel, the next year will come to more mobile

The Volvo XC40 is the first electric car with Automotive OS, the "Android for cars" Google Play Store built-in

–
The news Android Auto launches a new application to work on screens of mobile phones with Android 10 was originally published in Xataka Android by Cosmos .