Are filtered more details of the Redmi Note 8 Pro: screen Diaplay+ of 6,53 inches and up to 8 GB of RAM, among them 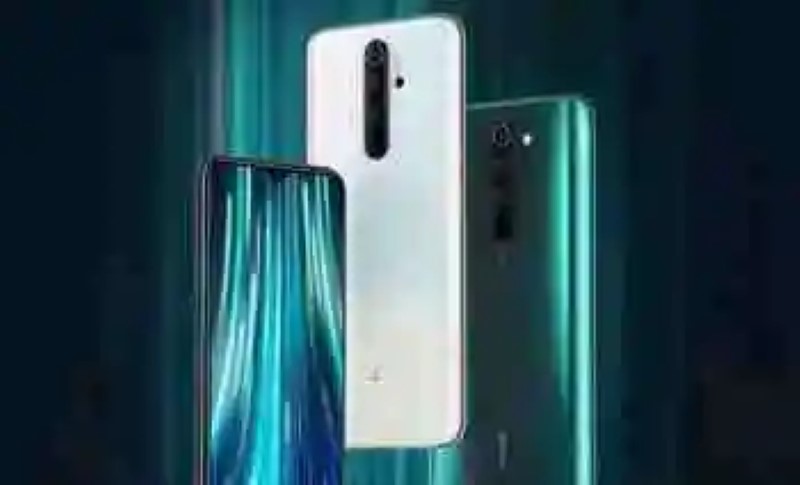 several days Ago, the CEO of Xiaomi confirmó that next Thursday, August 29, will present the successor of the Redmi Note 7 in China, next to the Redmi TV of 70 inches. Shortly after we learned also that in that same event will also see the light Redmi Note 8 Pro, and that both models will be built-in a system of liquid cooling.

Since then, have not stopped getting rumors and leaks around the new terminal of the brand Redmi. Thus, and thanks to the company itself, we know what are your processors: while the Redmi Note 8 will have the Snapdragon 665, the Redmi Note 8 will be theMediaTek Helium G90T. The majority of features of the latter, including its quad rear view camera 64 MP, have been leaked in full two days prior to his presentation. 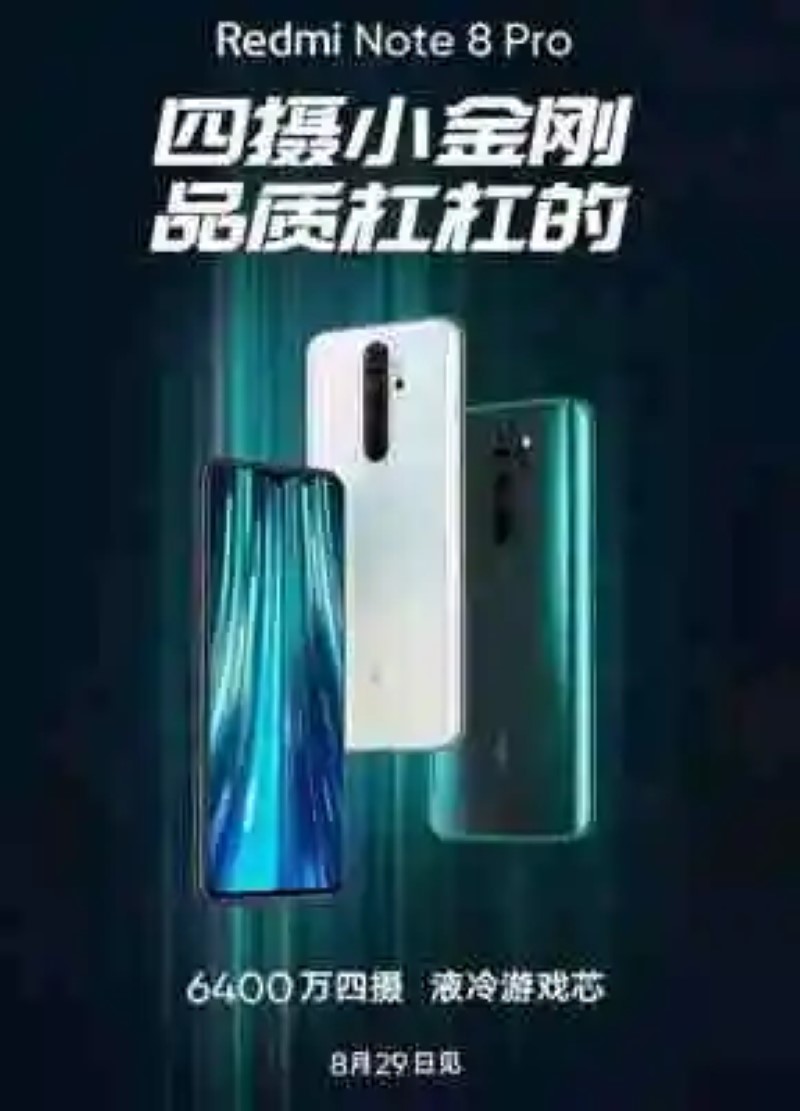 Thanks to the latest teaser posted by Redmi, we know that your model Note 8 Pro will include a screen with the notch in the form of a drop of water and a few bezels thin. This LCD panel is IPS, according to the specifications sheet leaked by Xiaomishka, will have a diagonal of 6,53 inches and resolution FullHD+ (2.340 x 1,080 pixels).

in Addition, the display of the Redmi Note 8 Pro would have the certification from TUV Rheinland (which means that reduces the blue light emitted) and would be protected by glass Gorilla Glass 5. Among the features leaked, also include the weight and the dimensions of the terminal: 199 g and 161,3 x 76,4 x 8.8 mm, respectively. 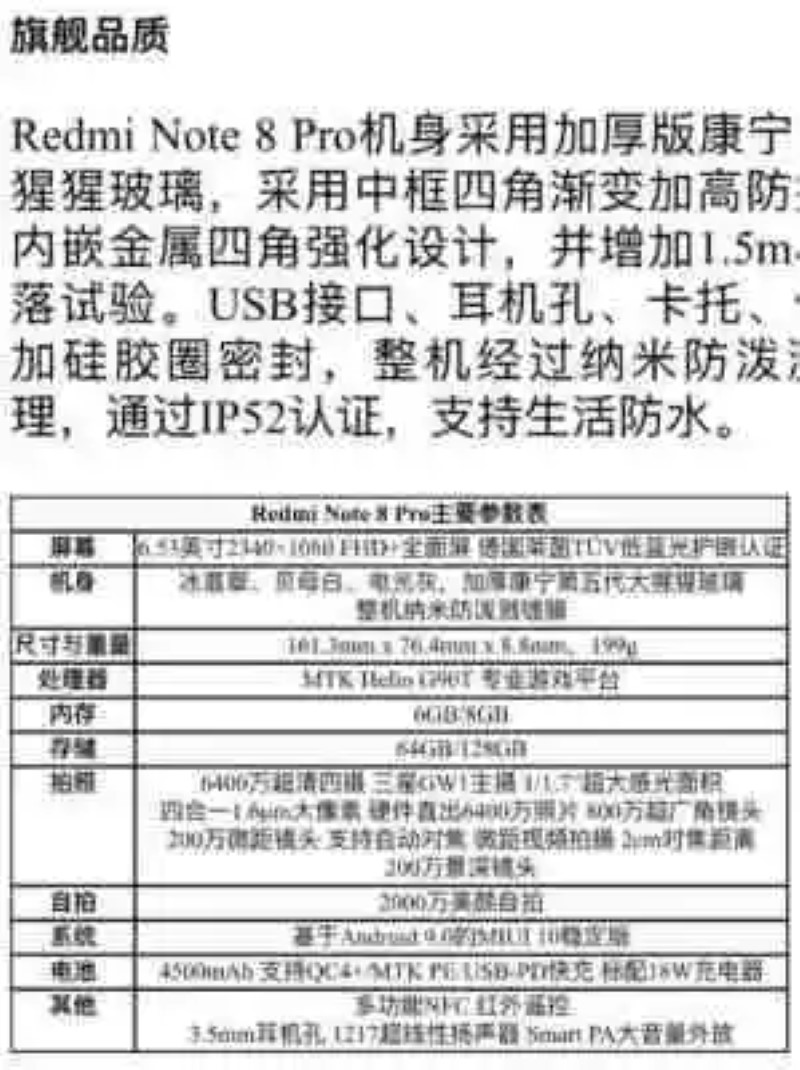 As we mentioned at the beginning, one of the benefits, confirmed both by the own Xiaomi as MediaTek is the presence of the processor Helium G90T aboard this new phone. This chipset would be accompanied, in principle, by two options of RAM memory, 6, and 8 GB, and two of internal storage, 64 and 128 GB, as well as by the operating system MIUI 10 on the basis of Android 9.

The battery of 4,500 mAh, NFC connectivity, and the jack 3.5 mm jack are other benefits that appear in this list. To all this, you would have to add a front camera with 20 MP resolution and a rear camera made up of: the main sensor Samsung ISOCELL Bright GW1 64 MP, a wide angle lens of 8 MP, a depth sensor of 2 MP and a lens super macro 2 MP.

More details on the Google Pixel 4: would the screen of 90 Hz, an accessory type DSLR, and more

–
The news Are filtered out more details of the Redmi Note 8 Pro: FullHD screen+ of 6,53 inches and up to 8 GB of RAM, between them was originally published in Xataka Android by Laura Sexton .

Free Download WordPress Themes
Download Best WordPress Themes Free Download
Download Best WordPress Themes Free Download
Download WordPress Themes Free
udemy free download
download micromax firmware
Download Nulled WordPress Themes
free download udemy paid course
Are filtered more details of the Redmi Note 8 Pro: screen Diaplay+ of 6,53 inches and up to 8 GB of RAM, among them
GTA Online: Double GTA$ and RP on all missions contact
The online game of Rockstar is updated with the latest news.Rockstar has a...
The absurdities and great wallpapers of Microsoft for Windows 10 Insiders
A ninja cat riding a unicorn started it all. No one knows how, but...
Alternative to the Roomba that facilitate the tasks of the home (and that you can already buy from offer)
That person who does not have as its weekly task cleaning the house can fe...
Zero, the number of Spanish director David Victori produced by Ridley Scott
The web science fiction series Zero was directed by Spanish director ...

phoneia.com (August 27, 2019). Are filtered more details of the Redmi Note 8 Pro: screen Diaplay+ of 6,53 inches and up to 8 GB of RAM, among them. Bogotá: E-Cultura Group. Recovered from https://phoneia.com/en/are-filtered-more-details-of-the-redmi-note-8-pro-screen-diaplay-of-653-inches-and-up-to-8-gb-of-ram-among-them/