Autopsy of a scene: ‘Texas chainsaw massacre’ and the last supper to 40 degrees in the shade 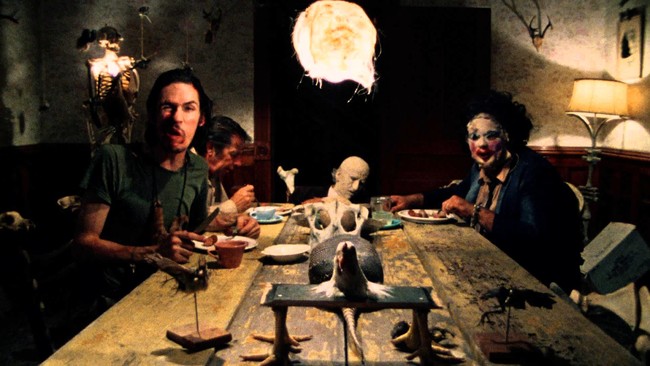 Possibly, there is no film more oppressive, suffocating, sickly and terrifying ‘The Texas chainsaw massacre’, the masterpiece of horror redneck of 1974 directed by Tobe Hooper full of youthful energy and defiant attitude. And within it, possibly there is no scene more insane, and deservedly so mythical that the dinner with the slaughterers. Inside and outside of the screen.

What the viewer sees is a true nightmare. After all your friends have been savagely slaughtered in a lost zone of the rural Texas by a family that dissected their dead, he kills everyone who passes through there and, possibly, then eats it, one of the best the final girls of the story, Marilyn Burns, wakes up tied to a dining room table.

Around the table are Leatherface, the Hitchhiker, the Old man and the Grandfather. Between all started a hysterical torture that culminates in the long attempt that the Grandfather shot into the girl as if it were a res. And among all, also, are part of this sequence is masterful and awful, that we dissect thoroughly, after the psychosis of mars of ‘Total recall’, the new installment of our video of ‘Autopsy of a scene’.

But as we say, the voltage that can be sensed in the environment comes not just from the extraordinary atmosphere that sought Tobe Hooper with very limited means and a very talented. Part of the setting of the nightmare was real. To begin with, the heat is smothering Texas ended up growing on the set, and had to attend to stakeholders and team members by heat stroke.

To continue, Gunnar Hansen, behind the mask of Leatherface, that could not be washed so as not to incur in errors of fitting, began to lose temper because of the heat and obsessing over not to repeat a sequence that is stuck. the Stunned by the heat and the low visibility of the mask, it came to cut of truth, the finger Burns, in a plane that stayed in the final assembly.

a Good part of the suffering of the team is reflected in a sequence of unique and unrepeatable. So many hardships, at least, had a good match: a perfect time of horror movies most extreme and suicide in the seventies.

What should I have to take your laptop to work from home?

Gunnar Hansen, the iconic Face of Leather in 'Texas chainsaw Massacre', has died

–
The news Autopsy of a scene: ‘Texas chainsaw massacre’ and the last supper to 40 degrees in the shade was originally published in Espinof by John Tones .