A ‘modder’ integrates a screen and the pad in the housing itself of the Super Famicom, although its size does not allow it to be very comfortable.

Build a Super Nintendo portable with the housing of the console itself
A 'modder' integrates a screen and the pad in the housing itself of the Super Famicom, although its size does not al...

Many modders of consoles they are trying to adapt classical systems to portable format, and thereby reduce its size. This is very simple with the retro platformer, like Super Nintendo, but a creator of modifications has filed a variant of the Super Famicom that takes advantage of the own housing of the console original to integrate a display and the controller, as if it were a Game Boy.

Obviously it is a curiosity that you forget your practical sense: the size does not allow it to be easily transportable, but at least maintains the distinctive design of the 16-bit console. In the video posted on Twitter we can see a game of Final Fantasy V, the RPG from Square Enix.

► Wolder presents its new range of devices: WIAM 23, 46, 71 and 71+ They had a few days warning that had s...
► Blitztank shows her skills in BlazBlue: Cross Tag Battle The character will be part of the 2.0 update...
► Imagine a racing game Star Wars in the Unreal Engine 4 An amateur personal project. It user forum...

Other changes to the laptop

There is modders that they are looking to reduce the size of the original system. Last year Ben Heck presented his version of Neo Geo Mini to make it even more small and manageable -at the cost of losing your form of recreation-, with a tutorial for those who dare to these transformations. Use the same screen and some pieces of the original. 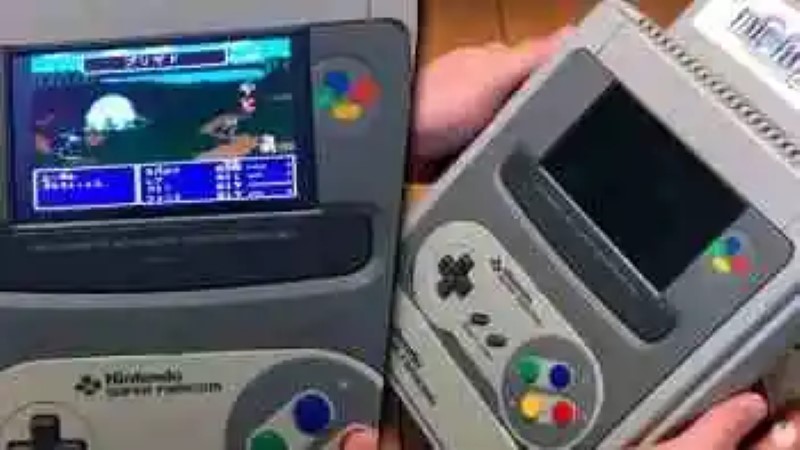 New ZTE B866V2, a multimedia player Android TV with 4K video at 60fps and artificial intelligence
we Started to get used to the park of tvs that you can buy in any gro...
Pokémon Picross presents its launch trailer for Nintendo 3DS
The game, free, available from December 3 in the eShop. Nintendo has dis...
Moon Display transforms your iPad into a second display for Mac
After the campaign, Kickstarter, Astro HQ offers Moon Display, a device th...
Temple Run 2 Die erwartete kommt schließlich zu Android schwierig, so viel wie möglich laufen
Temple run ist eine der beliebtesten kostenlosen Spiele auf dem gesamt...
Bibliography ►
Phoneia.com (November 19, 2019). Build a Super Nintendo portable with the housing of the console itself. Recovered from https://phoneia.com/en/build-a-super-nintendo-portable-with-the-housing-of-the-console-itself/

This article was published by Phoneia, originally published in English and titled "Build a Super Nintendo portable with the housing of the console itself", along with 18988 other articles. It is an honor for me to have you visit me and read my other writings.
◄ Smartee Feel and Smartee Stamina, two new smartwatches with sporty design and water-resistance
Trailer for ‘V Wars’: Ian Somerhalder stars in a cocktail of action and horror vampire for Netflix ►