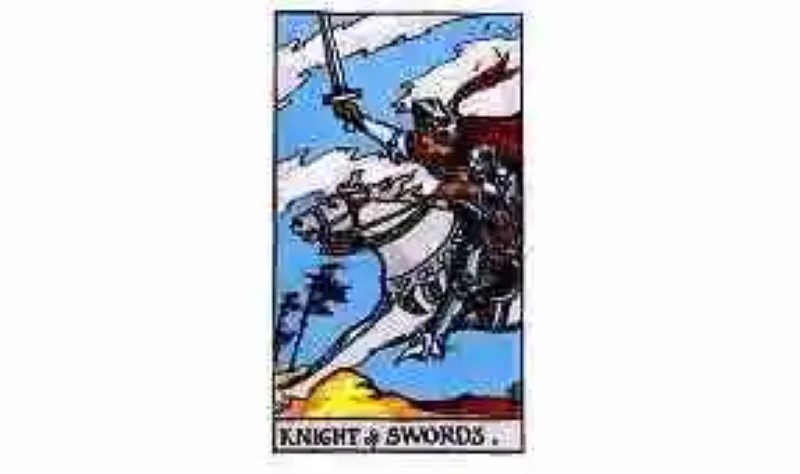 Knight of Swords Tarot card meaning
Symbology Named Knight of Swords, this card ranks number twelve on the Swords suit of the Tarot Minor Arcanes. On ...

Named Knight of Swords, this card ranks number twelve on the Swords suit of the Tarot Minor Arcanes. On this occasion we want to provide a summary of the symbolic features of this card, as well as the general interpretations attributed to it by scholars of this divinatory method.

Based on the deck of the Rider Tarot, we can see in the illustration of this deck, a knight of armor, who gallops on a white steed, in total attitude of attack to the enemy. Deployed in battle, he carries in his right hand a large sword, as he traverses the card from right to left, that is, from the plane of action to the plane of thought. It also carries on it a red layer, a symbol interpreted by some as a sign of action.

► What kind of swimsuit to wear In this article we will see what type of swi...
► Examples of professionals and artists with Down Syndrome Down syndrome is a genetic condition, long p...
► The true story of Phineas and Ferb Phineas y Ferb is an animated television ser...

As for his offensive and thrown attitude, some symbolism experts have indicated that this gentleman seems to represent a young man who acts with the courage that gives him not to know the defeat. Thus, undefeated, he continues to advance without any fear of losing, for he does not know what the feeling of loss is.

Contrary to what might seem, the Knight of Swords is also taken by some such as the charter of diplomacy and strategy, for in addition to his verves, this card also speaks of a great mental ability, which is able to deduce the future, not only by a senti intuitive, but through logical and rational analysis of present events.

Similarly, the Knight of Swords card – as with all the cards representing court figures – may be pointing to someone specific, who could well be the consultant or someone very close.

Thus, the Knight of Swords speaks of a young man, perhaps related to the military world, who enjoys a rather rich intellectual level, which is seen in his manners and comments, which cover almost any subject, for he is a person who has devoted himself to reading.

However – despite his speech and talent for diplomacy – he is someone who is aware of his intellectual talent, which can sometimes cause him to fall into episodes of ego, in which he can mistreat the one who makes a mistake, losing all tact or empathy towards e The other one.

With reference to the specific blueprints of existence, the Knight of Swords has specific meanings. For example in the field of work, the appearance of this card may indicate that the consultant is in a situation where he may be sinning as an idealist.

That is, that by excess of philanthropy or naivety is giving much of itself in a work that may not have so much future, so it is necessary to place our feet on the ground to understand that the work we do must be balanced, that is to produce an equite benefit the one we produce others with him, for we are risking wasting our energies from what we are saying.

Likewise, the presence of the Knight of Swords in a Tarot consultation speaks of the importance of being diplomatic at work, to the point of being sweet enough to explain something to our subordinates, as well as humble enough to receive instructions from our superiors.

However, the appearance of this card may also be warning us of the arrival of a very intelligent but yet impulsive and passionate chief, who is suddenly not the kindest person when making corrections, but from whom the consultant can learn much, because it has a great knowledge.

In the loving realm the appearance of the Knight of Swords announces to the consultant that he is about to live a moment of sincerity in his partner, where the two will sit down to speak without any detail about the problems they are going through.

However, and therefore it is necessary to always analyze the cards in context, the Knight of Swords may appear to warn the consultant that their love relationship is at a time when passion and interest have declined, for neither of the two you feel the challenge of knowing and having the other,so you need to have a conversation or get some mechanism that works to restore the spark to the relationship.

Likewise, this card warns of the danger we run from focusing more on our ideals and ways of conceiving things, which as they really are. So the Knight of Swords may be warning us about a platonic infatuation with someone who will not belong to us, or the danger of handing over much of our effort in an unrealizable project or that getting done doesn’t actually make the giant changes that we believe it can contribute to the world. In short this card may bring with it the warning not to fall into quixodes.

Like the other cards of this divinatory method, apparently emerged in Medieval Italy, the appearance of the Knight of Wands has a specific meaning if he appears inverted, that is, head.

In this sense, the message of impulsivity that he possessed when he was right takes on even more weight, so the warning of being a little more measured by our comments and actions can be inferred because we risk hurting someone for not finding out or clear things up before acting.

Likewise, the Knight of Swords may refer to the view that perhaps the consultant has been evading some responsibilities. Also the appearance of this inverted card warns about small accidents that may be the product of speed or of not thinking well the consequence of certain actions, however these are small wounds.

Two of Cups Tarot Card Meaning
Symbology Named after the Two Cups,this card occupies the second place o...
Relaxing massages with live snakes
It seems that the world of cosmetics was not relevant to use few conventio...
Ten steps to quit smoking
One of the most difficult things that a person can face is the fact of lea...
Mysteries of space that could not be explained
There is no doubt that the universe in which we live is one of the most sp...
Bibliography ►
Phoneia.com (September 18, 2019). Knight of Swords Tarot card meaning. Recovered from https://phoneia.com/en/curiosities/knight-of-swords-tarot-card-meaning/