The life of a tanatologist

With the first deceased, he was not able; disgusted him, fear, both of death and of the dead. The victim of a murder was his number one client and the look of this was not exactly the best. Trying to accommodate an eye that was outside, due to a shot in the face, Julio Alberto, only 15 years old at the time, when he was starting a race not so keen for ordinary people, ran off in.

The life of a tanatologist
With the first deceased, he was not able; disgusted him, fear, both of death and of the dead. The victim of a murder... 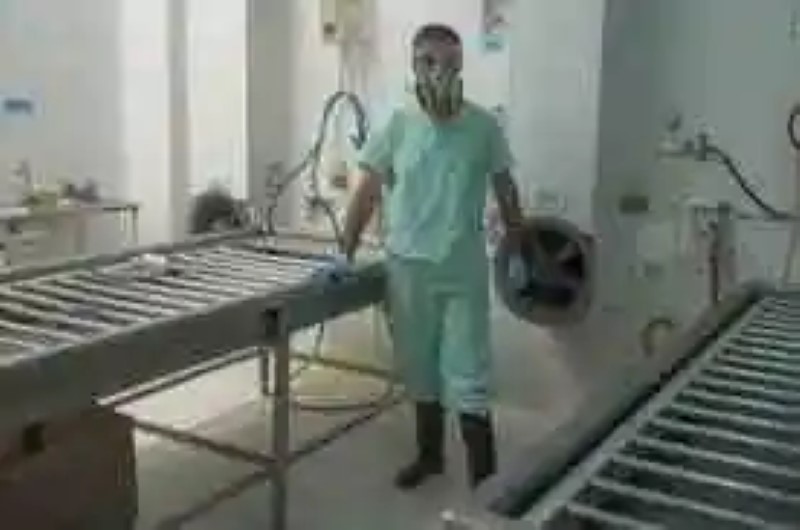 Julio Alberto Granados Patarroyo, born may 05, 1953, in Tinjacá, Boyacá, is the only son of Telésphore and Maria Adelaide.  When he was in his second grade, he decided to drop out of school and his parents forced him to work. She tried as a bricklayer, but it didn’t last for a week, because her context was very thin and fragile and, well, she confesses that she didn’t like it at all, as she had never done any work that required great physical effort. All these circumstances led him to his uncle, who owned a funeral home in Bogota.

► The fastest motorcycle in the world One of the things that most lovers of speed ...
► Dinosaur eggs found on the street by workers Dinosaurs are spectacular creatures that mad...
► Non-alcoholic cocktails for Christmas Although December is par excellence the mont...

So within days of retiring from his studies, he arrived in the country’s capital, intending to assist Alfredo, his uncle, in the funeral work.Everything was imagined: that he would surely take care of the accounts, the courier, the reds or perhaps, even the toilet, everything but to manage a corpse.

Maria Adelaide and Telésphous, decided to give a dig to their son, so they planned everything together with Alfredo, the brother of Telésforo, who would be in charge of giving him a bad time, so that, at that time, the young Julio, reflected on the need to prepare academically for life; what they didn’t foresee was that he was going to prepare for death.

The day after unpacking his things, he eagerly awaited instructions for what he should do. As expected,Alfredo indicated these activities but, oh surprise! The step to continue was to observe him carefully, as he prepared the corpse of an old woman, for the later wake and, in this way, learn the trade, with the excuse of replacing the uncle in matters of tanatopraxia, since it was often seen in races, because he had to attend to financial matters.

Julio Alberto was too surprised, since that plan did not include within his ideals, but within those of his parents, because of that lesson. Then he gathered all his courage and courage and proceeded as agreed. He saw without distraction, the modus operandi of that expert in the subject, called tanatologist; her eyes moved from top to bottom and vice versa, when she noticed how the old lady’s bowels were removed and the nausea soon appeared.

Luckily only that appeared, according to him. The hardest part, she says, was that process, and later, it was just a matter of makeup and costumes. The latter also shocked him, in a way, for there were not many naked bodies that he had looked at in his short existence and, less, that of an old lady.

After a tremendous spectacle, it was lunchtime. For obvious reasons, there weren’t many bites the boy tried. While waiting for the clock to mark the time of returning to work, by chance, he heard a conversation between his uncle and his wife, in which, overrun with laughter, he told him what had happened in the morning and his brothers’ plan for his son.

Learning of his parents’ purpose, for Julio, it was a challenge to be fulfilled, as it did. He wanted to prove that he was not as useless as they thought and, this, gave him enough courage to propose to Alfredo, that the next client would take care of it alone.

Alfredo believed that his nephew had guts, and accepted the proposal, on the condition, of course, that he would oversee everything. And so it was, the next day in the afternoon came the deceased. Either he made it, or he went back to school. He took the defunct body and began preparing it for burial. He sewed some wounds, wiped his skin, pulled out his visors. When he got to his face he was defeated. I wasn’t capable. The West had been killed with the bullet from a shotgun that hit his face. He smashed it. Loose cheekbones, eyes out, cheeks decomposed. An unrecognizable face.  Julio withdrew from the site and earned a scolding for not finishing the job.

After the fact, caring for the hearses was his only option, or returning to Tinjacá, his village, with the “tail between his legs”, as used to be said by an old and well-known philosopher, whose name begins with Ch and ends in Eight. In this activity it lasted about 4 weeks. But, both seeing him come and go dead every day and, after that cruel experience, led him back to challenge his uncle.

He accepted for the second time and, on this occasion, everything went perfectly. “I would not have done it without my uncle’s help, may he rest in peace; However, I squeezed my pants and didn’t quit,” he added. From that day, to date, almost 30 years later, he has dedicated himself to a trade that is not for any neighboring son and that, unfortunately, in this country is not so well paid, since he earns the minimum in a funeral home, in the Boyac anese capital, plus 15 thousand pesos for each body you prepare.

Julio Alberto, a man who on his face reflects a journey full of experiences and sombre episodes, and who almost always dreams of dead when he sleeps, is daily on the outskirts of the Hospital San Rafael “lagarteando”. The ‘lizards’ or ‘pimps’ are the men who live off the commissions that funeral homes pay to get clients. They show great kindness, condolences to the relatives of the dead, one slap on the shoulder, and a business card with promotions and discounts for a burial. Death is his business and a lesson for his parents, to whom the dig was returned.

Champagne-based Christmas cocktails
Although the world of cocktails offers hundreds of options, the Champagne ...
The world’s longest rivers
Rivers are indispensable in the economy of peoples, as well as in their cu...
Nazi supertechnology, alien weapons?
The weapons that the Nazis were secretly building, in specialized and unde...
Curious Facts of Sleep
All human beings dream but the physical reactions of man and woman are dif...
Bibliography ►
Phoneia.com (June 30, 2019). The life of a tanatologist. Recovered from https://phoneia.com/en/curiosities/the-life-of-a-tanatologist/

This article was published by Phoneia, originally published in and titled "The life of a tanatologist", along with 18989 other articles. It is an honor for me to have you visit me and read my other writings.
◄ The Web Mystery Network
The poverty behind the Colombian parties ►