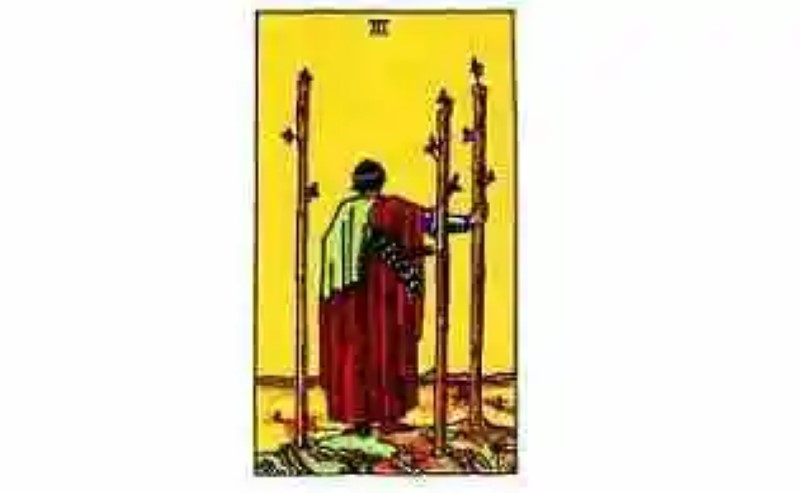 Three of Wands Tarot Card Meaning
Symbology Known as Three of Wands, this card ranks number three of the Tarot Minor Arcanes. On this occasion we wa...

Known as Three of Wands, this card ranks number three of the Tarot Minor Arcanes. On this occasion we want to offer a synthesis of the interpretations made of it by the majority of experts in this divinatory method that apparently saw the light for the first time in Italy during the Middle Ages.

Based on Rider’s Tarot we can see in this card a man with his back, which is between three Wands, two to his right, of which he holds one in his hand; and a third wandwhich he holds with his left hand. Man holds the wand that represents action, the outside world.

► Celebrities who wear a wig because they suffer from baldness They say that you shouldn't get carried awa...
► The Tower of London and its “real” ghosts A tourist fortress with hundreds of gho...
► Feminine tricks to be more beautiful and conquer men In nature many species are adorned and dance...

For some experts in symbology this card constitutes an extension of the meaning of the Two of Wands, but while in that first card the character of the card is apparently planning or wishing to depart on a long journey, in the Three of Wands it seems he has already started it endea, and watches attentively the new and alien horizon that is placed before him.

In this sense, some symbol specialists also repair in the attire of this character, as well as in the landscape presented to him in this way, because it seems to be an open field, where there are no people or people in it, so this is interpreted as the possibility to choose any destination, any path.

So also some tarotists and experts in symbology agree that the three Wands of this chart also represent the three times in which we move, that is: past, present and future, and the need to have our sights always on these three moments, so we know where to direct our destiny.

Referring to the concrete planes of existence, the Three of Wands has an essential meaning that points to the ability to have a cold mind, even amid the emotion that can mean an adventure or a new experience to have the ability to to stop and evaluate the best options.

However, it also warns not to let ourselves be entrenched by the pride and ego that can be born in us by obtaining the goals and objectives set, so it is necessary to keep our heads in place, our feet on the ground and the look on the future, since relying too much can be catastrophic for our future stability.

Following this line of thought, you could say that the keyword is “perspective”, you need to make a stop and see things, that is, the plans, from various points of view, even sometimes it is necessary to go back and reconsider the steps. Likewise,it is necessary to make amends in our premonitions and intuitions, so as not to misdo our decisions.

In conclusion, the Three of Wands would represent that individual of an explorer and adventurous nature who nevertheless takes steps lightly but with the assurance of having evaluated and known before the land on which he will pass.

As for the concrete planes of existence, the Three of Wands has also specific meanings.For example, in the field of work the presence of this card may indicate that the consultant is about to live an era of new projects with high benefits.

It also warns the person that his intuition will be the order of the day when assessing where and how to make investments whose results will be highly favourable,because at this time he has the right energies to combine intuition and action, getting excellent results. Likewise this card announces the arrival of a creative and positive partner that will translate into great benefits for both the company and the life of the consultant.

For the loving plane this card also brings good aspects, because its presence speaks of strengthening bonds and feelings even when there is physical or temporal distance among those involved. The Three of Wands also refers to the fraternal bonds that are strengthened over time, manifesting themselves in love, fidelity and friendship.

However sometimesit also refers to the search for love adventures in parallel with the relationship that is lived, so the interpretation of this card in a loving type consultation must be analyzed in context, because it is the other cards that will tell us how to is the real meaning that this card takes.

Like the other Tarot cards, the Three of Wands also has its own meaning if it comes to appear inside a reading in reverse, that is, head. If, for example, it were a labour consultation,the presence of this card in this position might be alerting the consultant to the need to reflect whether it isn´t time to put an end to a situation or circumstance that may be making us waste our time and talent on something that won’t bring us enough fruit.

It may also indicate, depending on the experiential field in question, that the person is wasting his energy, without investing it properly, so again this card stands as a counselor to remember the importance of looking with perspective both the present and the future, use intuition and stop and contemplate the panorama before continuing the path.

The world’s rarest hotels
The hotels are mostly distinguished by offering comfort and comfort to vis...
Sagada’s hanging coffins
In different parts of the world different cultures have different ways of ...
The true story of sugar
Sugar, a product without which many people cannot imagine life. It is...
Perfume made from dead people
The human imagination does not know the limits, such is the case of Katia ...
Bibliography ►
Phoneia.com (August 31, 2019). Three of Wands Tarot Card Meaning. Recovered from https://phoneia.com/en/curiosities/three-of-wands-tarot-card-meaning/