Deezer to bottom: all that offers you this alternative to Spotify 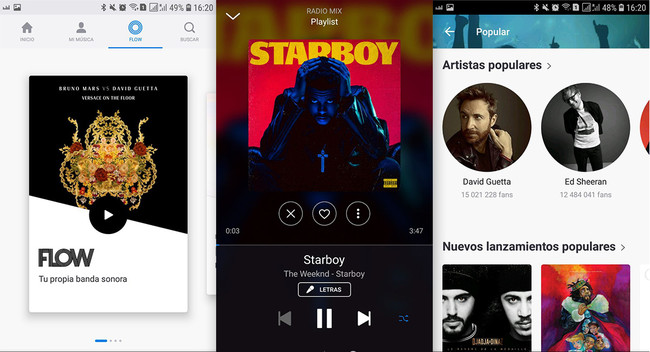 Spotify recently announced that it would offer more functions to users of the free version of Spotify, but is not or much less the only option at your disposal. Today we’ll talk about in depth of one of them, the French Deezer.

There is life beyond Spotify, Apple Music, Google Play Music and company, and today we will see all that gives you Deezer. Is it better than Spotify? Do you have a good selection of music? What limitations does the free version? 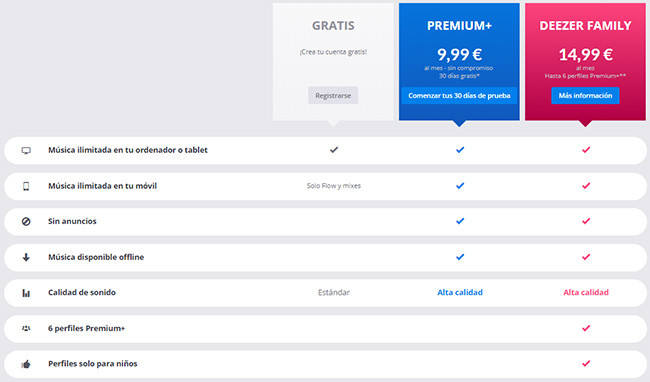 Deezer has copied in some way the duties to Spotify in its forms free and fee-based, although we will have to see if you re-copied after that Spotify offers more to users who do not pay. In Spain, the PREMIUM version+ it costs 9,99 euros per month and the family plan you get for 14.99 euros, six accounts. Exactly the same price than Spotify.

The differences between the free version and premium are also drawn to the Spotify. the free version has auncios, will not let you download songs to listen offline, has a lower sound quality and limits you enough so that you can listen with your mobile.

Deezer on Android plays the songs of shuffle mode, so that you don’t have much control over what you’re going to listen to apart from to be able to choose a Mix or Flow (we will see later what this is). At least is nice enough to let skip up to six songs per hour.

The ads almost didn’t bother. Almost are worst ads there will be ads. 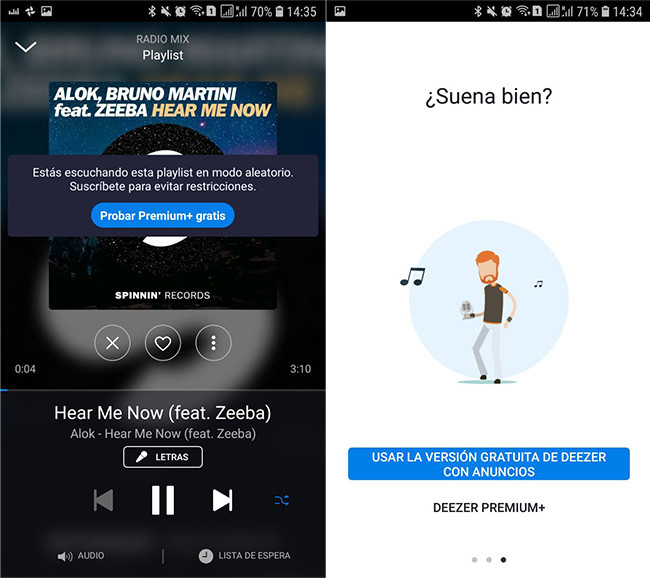 In regards to the ads, the truth is that are not as frequent as in Spotify, although this may depend on one area to another, where they have achieved more agreements. In my experience, most annoying ads are the ads there will be ads, which are everywhere. Deezer is a little bit aggressive when you try to become the user of payment, with constant reminders.

The quality of the audio in the free version is of 128 kbps, while in the paid version goes up to the 320 kbps. If you take the whole life listening to low quality MP3, probably not make much difference, although if you have a good ear you may want to the plan Hi, which offers music lossless (you need a compatible device). 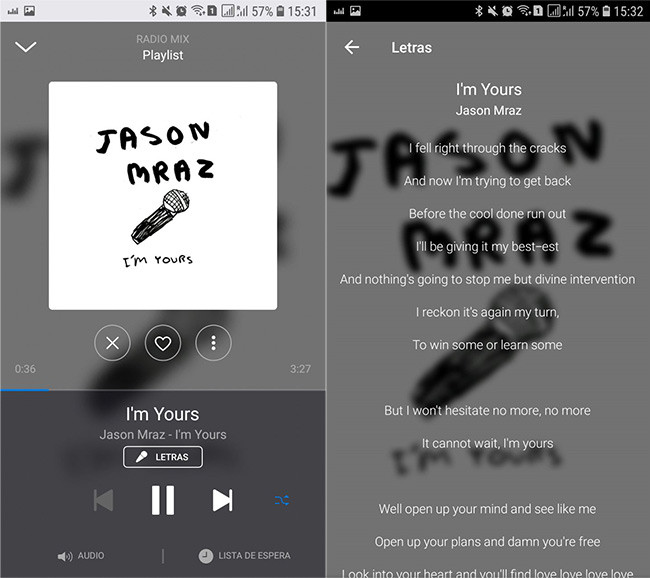 Some songs are accompanied with an icon of a microphone, symbolizing that the application account with the lyrics of the song. The viewer letters is not the most beautiful we’ve ever seen, but it is functional and saves you from having to go to another application or web page to do this.

Some letters move as you go the song, while others are static and you’ll need to you to move the text to be able to follow the thread. The lyrics come from LyricFind so almost all the songs fairly popular are covered.

What song is that? 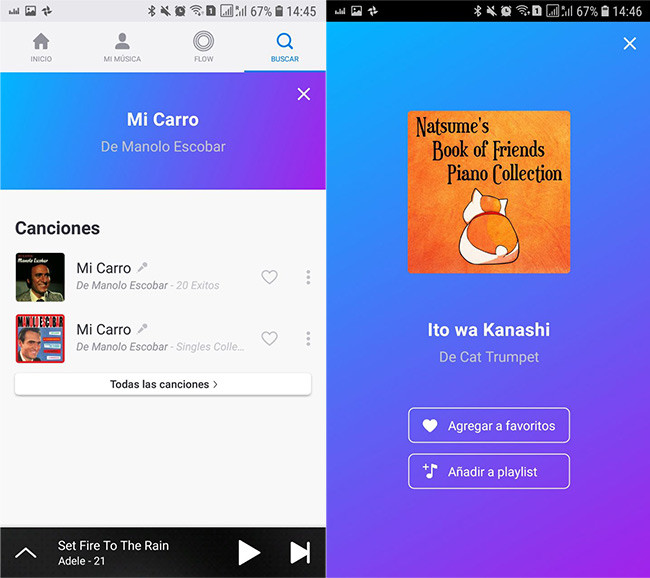 An added recent application has been the technology of identification of songs. Here receives the name of SongCatcher, and its location is a bit hidden: it is found in the Search tab, from within the application. And no, there isn’t a widget for this.

After putting it to the test with a series of songs of different styles, I can conclude that the id of songs works reasonably well. As always, the more clear is the source of the sound, the better and faster the identification. 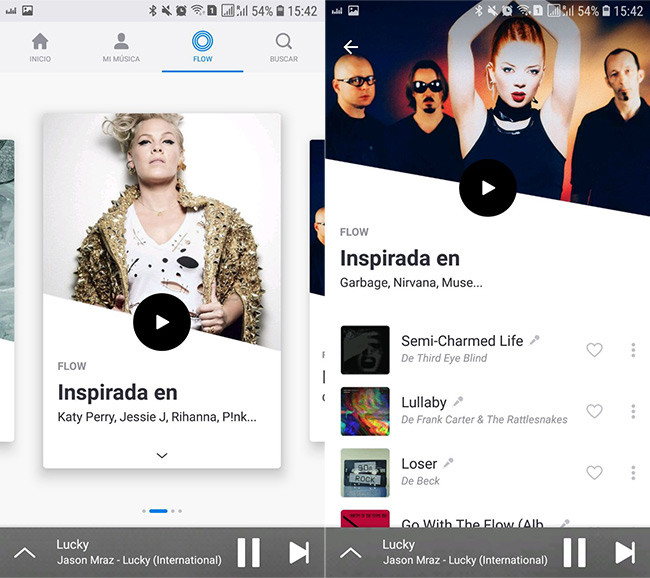 Deezer seems very proud of his Flow, to such an extent that he has devoted a tab unique within the application. But what exactly is this Flow of Deezer? In terms of Spotify, they are the equivalent to the Daily Mix. If you have no idea what that is, are playlists generated for you.

The more you use Deezer, the system will make a better idea of what you like and what not, and generate a few playlists that blend a medley of songs old and new, grouped by some logic. For example, don’t expect to see AC-DC mixed with The Fary, but yes a list of rockers and other singer-songwriters. 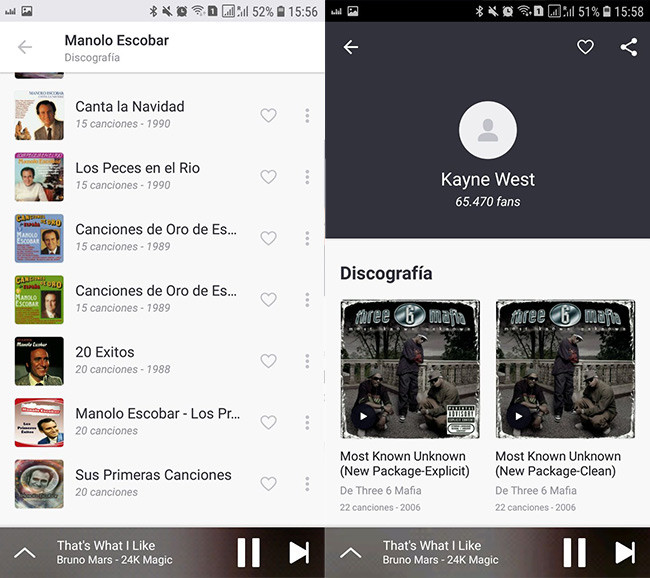 Speak of the catalog of a streaming service is always a rough terrain, because the artists that are basic to some people are totally expendable for other. On paper, Deezer boasts of having 53 million songs (if you need a comparison, Spotify announced it has more of 35 million).

The numbers are not everything, and may miss some other artist as, for example, Kayne West, while you will be able to listen to the entire discography of Manolo Escobar or the songs composed by Tchaikovsky. “More is better”, but I recommend that you check if your style of music has a good representation on Deezer for yourself.

In summary, a good alternative

In summary, we can say that the Android version of Deezer is pretty decent and it performs the function of volunteering as an alternative to Spotify, Apple Music, Google Play Music, and company. The price is the same, the quality is similar and the limitations of the free version, based (for now).

The foot of a limp Deezer is precisely the application itself, which feels a bit slow and not as smooth as for example the Spotify. It is not a great evil, since the hour of the truth will surely not spend a lot of time playing in the interface, but listening to music, but in the long run you could end up molestándote.

Deezer MusicVaries depending on the device.

In Xataka Android | Samsung Find My Mobile background: a tool more comprehensive than that of Google

–
The news Deezer to bottom: all that offers you this alternative to Spotify was originally published in Xataka Android by Ivan Ramirez .