Take-Two has done with the victory in the courts to be dismissed a lawsuit filed against the company by the system of facial recognition of the saga sports NBA 2K. We remind you that there is another lawsuit against the company in this saga, on this occasion because of tattoos of some players and their representation in the video game.

This lawsuit that now occupies us, and which, according to reports the Hollywood Reporter has been dropped by the american justice, by rejecting the judge to give formality to the process.

The lawsuit alleged that the company was collecting data from users through its facial recognition system (presented in NBA 2K15) to allow the player to stick his face in the video game. The complaint argued that this process violates the law of privacy of the biometric information of Illinois (USA). However, the judge John Koetl has been considered that have not gathered evidence or arguments as to initiate a judicial process. You can see this function, MyPlayer, in the following video: 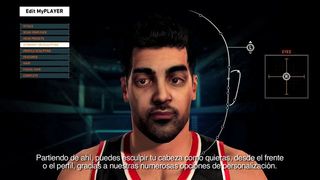 Illinois law for the control of biometric data

In 2008, Illinois (USA) enacted a law aimed specifically at the protection of the biometric data (for example, fingerprints) with the intention of protecting users against potential abuses of companies that can be requested and store them. However, several companies in the technology sector have presented allegations to challenge that law, among them Facebook and Google.

The lawsuit against Take-Two was introduced in 2015 in connection with the function MyPlayer that allows you to use a camera to picture the face and the head of the player with the intention of using their physical appearance in the video game.

in order To use this function, the user must accept the terms of use specific. On the demand it is alleged that the plaintiffs did not understand the terms of use, or how it is carried out the processing of their biometric data at the time of purchase of the video game and that does not have the resources to return it after the purchase and check how it operated this function.

The lawsuit alleged that Take-Two had not achieved consents signed for the use of data and biometrics, but the judge has taken into account the history of the case, Spokeo vs. Robins, 2015 in which the U.S. Supreme Court indicated that in a similar situation, the plaintiffs must show injury “concrete and particularized” so that you can fructiferar the demand.

The judge’s ruling in favor of Take-Two

According to the sentence, “the plaintiffs admit that they agreed to the terms and conditions of MyPlayer, NBA 2K15 scanned their faces to create an avatar of a basketball player custom and they used their custom avatar to play.” In the text of the judge Koetl stated “therefore, the plaintiffs indicate that the function MyPlayer worked exactly as expected. There is No evidence that Take-Two has distributed or sold biometric data of the plaintiffs to other companies or that has been used in a manner that is not collected in the only possible function of MyPlayer-the creation of a custom avatar to play“.

This causes the judge to consider that, in consequence, “the alleged violations of law of Illinois for the control of biometric data may be, in the best of cases, marginal” and there is no evidence that this has been able to go against the law.

The judge also notes that plaintiffs have not been able to demonstrate any imminent risk or damage on the part of Take-Two and considers that the potential risks outlined in the complaint are speculative.

Yes are supported in the judgment, however, that more extensive information on the function MyPlayer could have deterred to the plaintiffs use, so that you would never have used their biometric data.

phoneia.com (February 5, 2017). Dismissed a lawsuit against Take-Two by the facial recognition of NBA 2K. Bogotá: E-Cultura Group. Recovered from https://phoneia.com/en/dismissed-a-lawsuit-against-take-two-by-the-facial-recognition-of-nba-2k/