Dragon Quest I, II, and III will Nintendo Switch in Europe on the 27th of September

The three installments of the saga rpg created by Enix will come to the console hybrid to coincide with the release of Dragon Quest XI.

The launch of the games will coincide with the release of Dragon Quest XI S: Echoes of an Elusive Age – Definitive Edition, the extended version (with orchestral soundtrack, new quests and more content) for the game published on PS4 and PC last year.

Find out where it all began – the first three #DragonQuest games are coming to North America, and for the first time on console in Europe, on #NintendoSwitch!

You can start with any of the three games, so get ready for classic adventures from September 27th. pic.twitter.com/iPklL1k0uv— DRAGON QUEST (@DragonQuest) September 16, 2019

In the japanese version of the latest Nintendo Direct it was announced these three games for the Switch to japanese. Shortly after it was learned that the programs include texts in English, and began to especularse with the release outside of japan.

What has not been confirmed in Europe or in the united States is the publication of the physical version that combines the three games. This edition includes texts in English, chinese and Korean, and the card game used in the Switch european.

The first Dragon Quest (1986) was about the journey of the “Hero”, a descendant of the hero Erdrick, who embarks on an epic adventure through the kingdom of Alefgard. The sequel, Luminaries of the Legendary Line (1987), takes place 100 years after; the player embodies the young prince Midenhall, who must find the other two descendants of Erdrick in order to defeat Hargon. Finally, The Seeds of Salvation (1988) brings players to the land of Aliahan, where a young hero must kill Baramos, master of darkness.

I remember that on the eShop you have available a demo of Dragon Quest XI that allows you to play the beginning of the adventure (they are several hours of play) and progress may be passed to the final version. 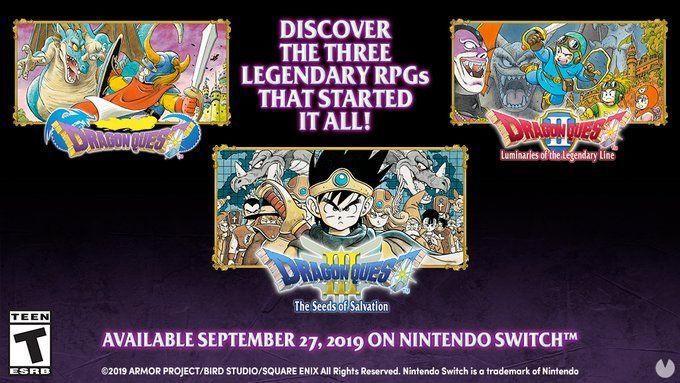