Players can modify all the land around it.
Dual Universe was presented as a science fiction MMO that will test all the skills of the players for explore, down the mine, crafting objects, trade, fight ?? Now, Novaquark , the studio behind the development of Dual Universe has submitted a gameplay of the pre-alpha phase game.
the objective of gameplay is to teach players some of the features that during the last E3 2016, Novaquark said that would be present in the game. Using an algorithm , all objects in the environment that surround the players are generated, while soft music helps the immersion process the game more noticeable. 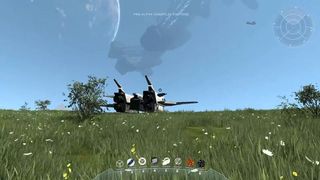 on the other hand, the ability shown that players will have to change the field around . This feature is very useful for mining jobs, for example, or for construction. Also, in the video you can also see how to manipulate the spacecraft with us at all times and that serve as the basis .
Remains to be seen if, finally, the developers will be able to keep this experience open, fully editable world, and adapt to the flow of millions of players that will massively . ¿Conjuntarán both good ideas?
dual Universe arrive in phase alpha during the 2017 , but still does not have a specific date.