E3 2019: See online the conference of Microsoft and Xbox LIVE

avoiding runout here the conference of Microsoft at E3 2019 where we will see Halo Infinite, Gears 5, new FromSoftware with George R. R. Martin or the next generation of Xbox.

20:07: It seems that people have very clear that we will announce the future Xbox console. More than two-thirds of our followers believe it.

what will Be announced today, the next Xbox console? It is in only three hours for the conference from Microsoft! Vandal (@VandalOnline) June 9, 2019

A conference with great expectations

Microsoft today celebrated its conference Xbox in the E3 2019 at 22:00 hours in the Spanish peninsula, where is expected to see multiple games of Xbox Game Studios, other publishers, and the first look at the features of the new generation.

This afternoon have leaked the first details of the next Xbox console, that could be one of the protagonists of this conference. Also launched Game Pass for PC.

Gears 5 and Halo Infinite will be two of the most anticipated games of the conference, but also the first look at Battletoads and new of their recent studies, such as the filtering Bleeding Edge Ninja Theory. In this conference we also expect to see Cyberpunk 2077, or Elden Ring, new from FromSoftware with George R. R. Martin -author of a Song of Ice and Fire, on which it is based the popular HBO series Game of Thrones-.

also Apparently talk of Scarlett, the console of new generation, with the first details and a look at your new control.

Rest schedules and conferences at E3 2019

These are all lectures and events:

we also share with our traditional image of the calendar of conferences of E3, so that you might have at hand all the times. If you want to know everything about the E3 2019, please visit our article E3 2019: Date, schedules of conferences, live broadcast, and games. 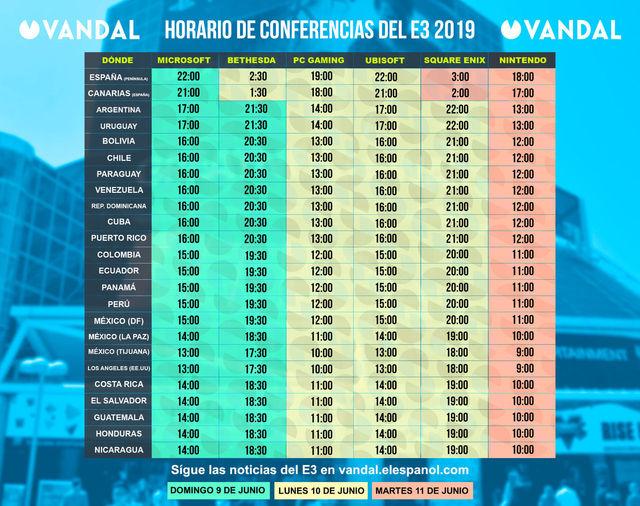