Alfonso X of Castile, also known as El Sabio (Toledo, 1221 – Seville 1284). Military and political leader of the Middle Ages, who succeeded Ferdinand III the Holy on the throne, thus becoming King of Castile and León, exercising in reign from the year 1252 until his death in 1284. 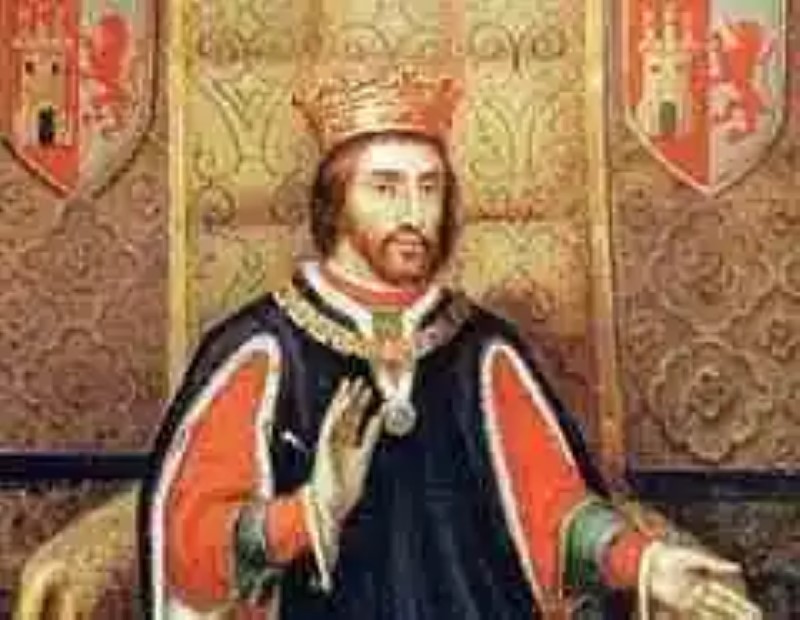 As King he propelled the process of reconquering the territories under Muslim control. However, his greatest legacy lies in the cultural aspect, which is why he was called The Wise.

Alfonso was born in 1221, in Toledo, thus becoming the firstborn of King Ferdinand III El Santo and his wife Beatriz de Sabia. On his father’s side, he was an immediate heir to the throne of Castile and León, while on the maternal side he was descended from the imperial family of Germany and Byzantium, which also entitled him to the Germanic throne.

In fact, at just fifteen months old he was taken to Burgos, to be the crown’s heir jury. However, very little is known about the childhood of this monarch, so historians cannot be clear about the facts and characters involved in the initial formation of this monarch, who became one of the great lawyers of the nobility.

As dictated by the custom of that time, as an infant, Alfonso began at a very young age in the art of war, beginning in 1231, when he was part of the Castilian campaign against the Muslim troops of King Ibn Hud. Ten years later, in 1241, he would have a brilliant participation in the struggles that led to the conquest of the Kingdom of Murcia.

Likewise, in 1244, he signed on behalf of his father, King Ferdinand III El Santo, the treaty of Almizra, with which he sellated with the King of Aragon, Jaime I El Conquistador, new limits of territorial expansion for the kingdoms of Castile and Aragon. Agreement that would also entail his marriage to Princess Dona Violante of Aragon, daughter of James I, thus politically joining these two thrones.

Hours after his father’s death on June 1, 1252, Alfonso was crowned King of Castile and León, adopting the name Alfonso X. His father, with whom at that time he had some complicated relations, left him at the head of a kingdom with good economic conditions, as well as with a great impulse of expansion, aiming at the territories in Muslim hands, located south of the kingdom .

In this sense, Alfonso X promoted the Reconquest of these lands, progressively gaining power over the Villas of Tejada and Jerez de la Frontera (1252), Lebrija (1255), Niebla y Cádiz (1261-1262), as well as Medina-Sidonia, Alcalá de los Gazules, Vejer and Murcia (1269). During this time, he also faced and defeated, in 1264, the Muslim uprising, driven by the sovereigns of Granada and Tunisia. And he tried to continue the advance against the Islam, even ordering the sale expedition, which in 1260 aimed to take North Africa.

As for domestic politics, Alfonso X had to deal continuously with the ghost of the uprising. In 1255 he had to stop the attempt at overthrow driven by his half-brother, the infante Enrique, who in the company of other nobles led the Biscay rebellion.

Nearly twenty years later, in 1272, he had to face the infant Philip, in a further attempt to snatch the Crown from him. Similarly, in 1257 he also starred in a conflict over the triune of the German Empire, when he was chosen by Saxony, Bohemia, Brandenburg and other Italian cities, in order to be crowned.

However, in 1276, after opposition to the Pope, who preferred Rudolf of Habsburg, Alfonso X renounced his title as heir to this empire. This stage, in waiting and fighting for the Germanic crown, became historically known as “the feast of the Empire” and brought a stage of great expenses for his reign, which resulted in the creation of new taxes, bringing with it its unpopularity.

In the cultural aspect, Alfonso X is recognized as one of the most important noble lawyers of the Spanish Middle Ages. He is considered the founder of the Castellana Prose, as well as the responsible for the adoption of Castellano as an Official Language, which would lead to the fact that it was this dialect that went on to govern the entire territory of the Iberian Peninsula and its colonies , at the time of the conquest, giving rise to the Spanish Language.

He also stood out for his knowledge and his role as protector and promoter of the Laws, Science, the Arts and History, being also considered as the first historian to adopt a scientific stance towards this discipline. Its role was fundamental to the establishment of three major knowledge centers in Toledo, Seville and Murcia. He was also a great promoter of Poetry, being himself a great writer of this genre in Galician language.

After a succession conflict led by his second son Sancho IV, Alfonso X was removed from his throne in 1278, following the failure of the Courts, gathered in Valledolid. Confined in Seville, he died before he could face his son, who rebelled because of his father’s willingness to appoint king of Jaén to the infante de la Cerda, allied himself with Aragon and Portugal against him.

His death, however, did not come to resolve the conflict, for in his will he disinherited his son, leaving as heir the infants of the Pig. However, he was succeeded by his son Sancho IV, which sat a Civil War between this monarch and the heirs appointed by Alfonso X.