Essay about democracy
Democracy is a form of government, raised correctly and in detail in ancient Greece. For these former sages, democra... 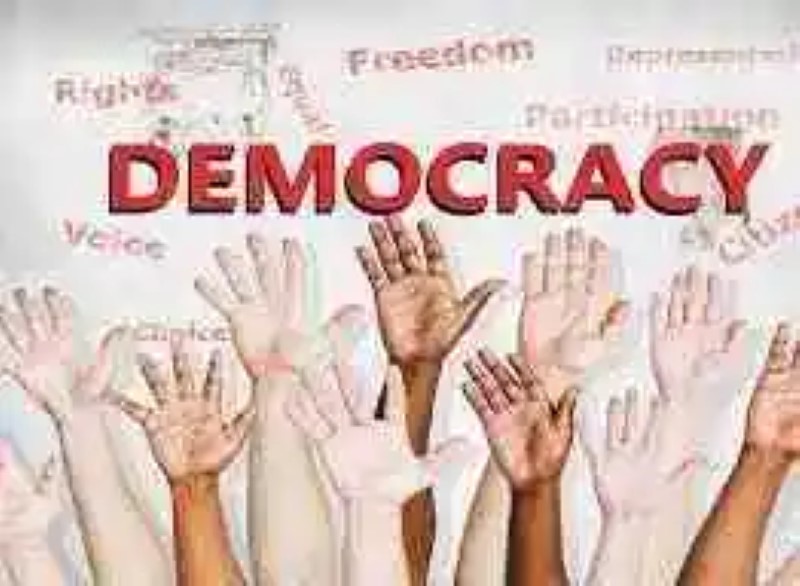 At present, it turns out to be just an ideal, but it is seen as an organization of the State, through which “through mechanisms of direct or indirect participation is granted power and legitimacy to political representatives. Although not fulfilled, history books and dictionaries define democracy as a way of social coexistence, in which all inhabitants are equal and enjoy total freedom before the laws.

But it would be impossible for citizens to be free, if each person is not truly free, both financially and psychologically. It should be noted that society in general, is the extent of each individual. So, by logical consequence, if every subject does not change, society would never change, even if its political leaders and campaigns always have as their motto democracy.

And it is precisely, the concept of democracy originally also comes from the peaceful but revolutionary movement, of Christianity, which fought to destroy the cruel differences between free men and slaves, having as its basis that in the eyes of God, we’re all the same.

The origin of democracy

But its most popular and well-known origin dates back to the year 1.000 B.C. in Athens, which was ruled by a king. Several kings ruled harmoniously, until one of them began to covet more and more power, leading him to commit grave injustices. This caused people to revolutionize and overthrow him. From that moment on, the monarchy ended in Greece and certain families began to legislate.

These families were groups of nobles or clan leaders and took military, political, and religious power, gathered in councils of archons, in which only members of those particular families participated.

This kind of aristocratic bourgeoisie remained for two centuries in Athens. They had their own aristocratic gods different from those of the people, who were regarded as lesser and inferior gods. Even, very similar to today, these elitist families bluntly claimed that power should be for the powerful, strong and rich, and not for the weak poor, such as peasants, craftsmen, and workers.

History of democracy in antiquity

Everything began to change in the 5th century B.C. five centuries later, with some rather complex processes, struggle, revolutions and transformations. The idea of equality among all Atheians was increasingly being touted, but there was a lack of a leader to effectively carry out these democratic ideas.

Clístenes and Pericles were those great leading men, promoters of real democracy. Interestingly, Pericles was a great aristocrat, but very different from the bourgeois families of yesteryear who despised the offspring, but on the contrary was quite reserved, modest and quite a revolutionary.

The great philosophers of history were very good friends of Pericles, such as Sophocles, Anaxagoras, Herodotus, Fidias and Protágoras. It was just that he was a genius who was a lover of beauty and wisdom. He was Pericles, the true Father of Royal Democracy.

What is seen as democracy in nations that currently call themselves democratic,is not really like the original of Athens. Today people are unhappy, with anguish, hungry, and it is already proven that hungry people would never believe in democracy.

As one great sage of those of antiquity said, “Democracy is the wisely organized people. Democracy is not the wrong support that the deceived people give to a lifelong dictator.” Today, democracy is just a beautiful word to convince and deceive the masses, with a totally false speech, making you think that democracy is going to vote for any of these actors by speaking something they will never fulfill, whoever they are.

Decimal numbers
Perhaps the best thing, before going deeper into the definition of Decimal...
Learning Quotes
Even though there is a deep and widespread debate in the Philosophy of Lea...
Archimedes Biography
Archimedes de Siracusa (Siracusa, Greece, c. 287 BC – ibid., c. 212 BC). ...
Summary of The Heart of Darkness
In the field of Universal Literature, and specifically English Literature,...
Bibliography ►
Phoneia.com (July 7, 2019). Essay about democracy. Recovered from https://phoneia.com/en/education/essay-about-democracy/

This article was published by Phoneia, originally published in and titled "Essay about democracy", along with 18987 other articles. It is an honor for me to have you visit me and read my other writings.
◄ Reflection on the First World War
Summary of The Right Hand of God the Father ►