The game is a development of the Swedish study Experiment 101.

has leaked a new project, edited by THQ Nordic, and developed by the Swedish studio Experiment 101: Biomutant for PC, Xbox One and PlayStation 4.

The filtration is due to that the German magazine GamesMarkt has come to the kiosks germans before time, and it includes a page advertising this game, which promises to be a bet by the action role with a raccoon as a protagonist and a concept of open world.

The raccoon, whose name is not yet known, will be equipped with a great sword, which could anticipate a combat system focused on the use of bladed weapons.

What’s more likely is that the game is present during the next week, at Gamescom of the German city of Cologne, and that’s why it was already scheduled advertising for the September issue of the magazine of the germans. 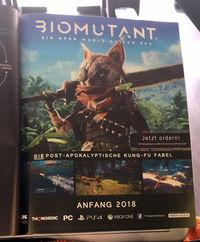