Google Cloud Print will close by the end of 2020

Google announces closure of another of its services. If this year saw as its social network Google+ I missed the closing this year, next year it will Cloud Print.

The service-based printing Google cloud will stop functioning after 31 December 2020. That means that from the first day of 2021 will no longer be able to use their official application for Android to print from their compatible printers. 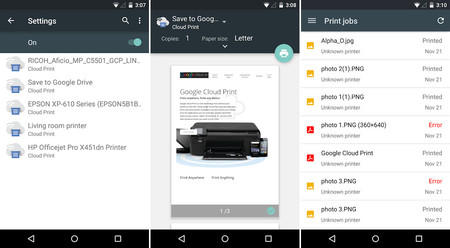 Google Cloud Print was born in 2010 as an open protocol for connecting the printer to the cloud and to be able to print from any device, without having to install drivers.

This was the solution of Google to be able to print from the Chromebooks and Android, where at that time manufacturers of printers were not giving official support for the operating systems of Google.

How to print documents from an Android device

In all these years, Cloud Print has been in beta period but despite not having reached to launch a stable version to the market, the proposed Google got its goal. Now the majority of the printers have their own print options in the cloud with what Google has decided to close its service when there are already alternatives.

Cloud Print came to Android as application in summer of 2013 and the end of the year was integrated as a complement to print in Android KitKat or higher. Now both Chrome OS and Android natively support the management of printers. Now if we have connected the printer to the same Wifi network our mobile detect it without having to install anything.

you Print anything from your Android using Google Cloud Print

You can still skip the protection reset factory on Android N

How to print from your Android directly to your printer

–
The news Google Cloud Print will close by the end of 2020 was originally published in Xataka Android by Cosmos .