The famous navigation app from Google, which already collects more than 5,000 million downloads on Google Play, continues to implementing improvements and developments in their successive versions. In recent months, for example, we have seen how incorporating the possibility of chat with the business in the section ‘Messages’ or how to improve your support Assistant.

at The same time, the company of Mountain View continues to test new functionalities, such as navigation with augmented reality Map Live View, who we met in February, or the sending alerts for reporting of accidents and speed cameras. Well, this last is already a reality for many users and soon will be for all. 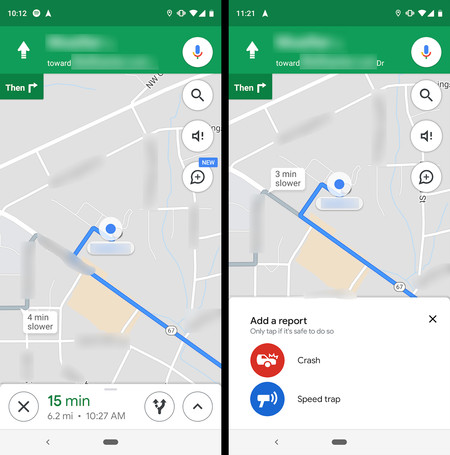 After that, in mid-January, Google Maps began to warn of speed cameras and, soon after, of the speed limits, several users say they have available in the application, a new option to alert you of the presence of both accidents as radar.

Google Maps background: guide with 35 tricks to take advantage of all its functions

This feature, that Google began testing it months ago, it was one of the strong points of Waze, the social network of traffic, and maps that the great G acquired in 2013. Now, almost six years later, Google Maps has incoporado finally this functionality, during the navigation, and through a new icon (similar to a sandwich comic), allows users to send alerts to other drivers. By touching the icon, appear the two options are available: accidents and speed cameras, nothing to warn of the presence of police controls.

When you press the icon, appear the two options are available: accidents and speed cameras, nothing to warn of the presence of police controls

Google has not yet officially announced this feature and it is unknown when it will be available for all the world, but several people have confirmed on Reddit that you have already received. What we do know, thanks to 9to5google, is that, for the moment, has been enabled remotely for some users of Android, so installing the latest version of Google Maps does not guarantee that we can get it.

Samsung prepares new gestures, so that you can dispense with the navigation bar

Radars on Google Maps: the app starts to warn of speed controls

–
the.news Google Maps already allows users to warn of the presence of accidents and speed cameras originally.published.in by Laura Sexton .