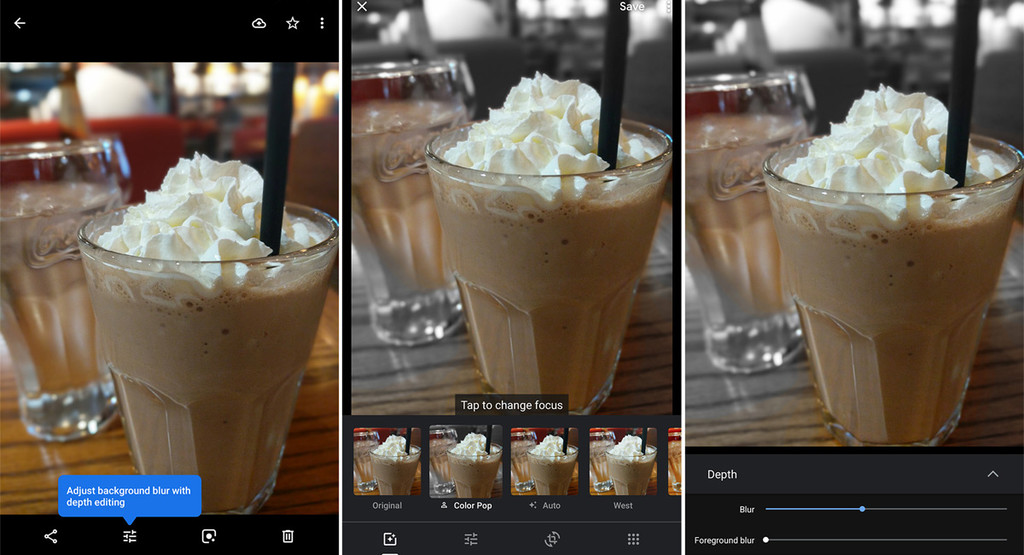 what’s New in Google apps: know when you are advertised but not where it will end up coming to our phones. Two new features of Google Photos are now closer to reaching all: the possibility of change the level of blur of a photo and Color Pop, the effect of highlighting a person or object and keep the rest of the photo black and white.

Both effects have been detected by the user Vegar Henriksen, who has shared screen shots of their operation. For now, it seems a test spot and not a mass deployment, although the less we are left with the consolation that it should be less in order to reach the users with a novelty that is announced the last may.

As you can see in the screenshot above, it is easy to see when you have activated this new feature as a bubble lets you know that you can adjust the level of blur of the background with the button for edit the image.

to And highlight an object with Color Pop

Another novelty that has been found in the same user selected is Color Pop, which highlights an object or person and shows the rest of the image black and white. Despite the fact that the effect of Color Pop is coming timidly from weeks ago in the form of creations of the wizard, it is also possible to add it manually.

In this case, Pop Color will appear on the first tab of Google Photos, which show the various effects ready-to-use, between the Original and Automatic. By tapping on the image, you can adjust what is kept in focus and what will happen to be in black-and-white.

Google Photos receive the first news of the Google I/O: and are Color Pop and the suggestions that improved

By now it seems that many people have these developments active in Google Photos, so everything indicates that it is a test in a númerp reduced of users and devices. The rest of us mortals we will have to continue waiting patiently.

–
The news Google Photos allows you to change the blur of a photo and adds Color Pop to some users was originally published in Xataka Android by Ivan Ramirez .

phoneia.com (September 24, 2018). Google Photos allows you to change the blur of a photo and adds Color Pop to some users. Bogotá: E-Cultura Group. Recovered from https://phoneia.com/en/google-photos-allows-you-to-change-the-blur-of-a-photo-and-adds-color-pop-to-some-users/