If we lose or we steal the mobile, recover it can be a complicated task, but fortunately there are apps that can be of great help. In Android we have the Find my device, but there are other alternatives very interesting as Cerberusthe app anti-theft and more popular and the same to the Google has recently sent out a warning for violation of their terms of use.

According to Google, the problem with Cerberus is that it tracks the location of the device without notifying the user. For this reason, the company requires the application to modify this point in a period of seven days or the application will be withdrawn from the official store. The problem here is that the alleged suspicious behavior of the Cerberus is designed to crawl the location when we have stolen the mobile, i.e., which tracks únicamenta the thief. Google, you have not understood anything.

More to fight against malware and less Cerberus

cases of malware affecting Android are still coming in regularly, some of them even they sneak in the Play Store. Recently, Google implemented Google Play Protect to improve the detection of malware, but it is clear that still a lot of work remains to be done to the official store is a safe space and free of malicious content.

While cases of malware on Android continue to flourish even within the Play Store, in Google have put the spotlight on Cerberus, an app anti-theft with over a million downloads and very good ratings that took years to be in the Play Store.

Eye because of the millions of downloads or good scores are not synonymous with that an app is safe (last week same we saw it with CM Browser). However, in the case of Cerberus, the reasons you give Google to require changes in the app manifest that you have not understood anything. 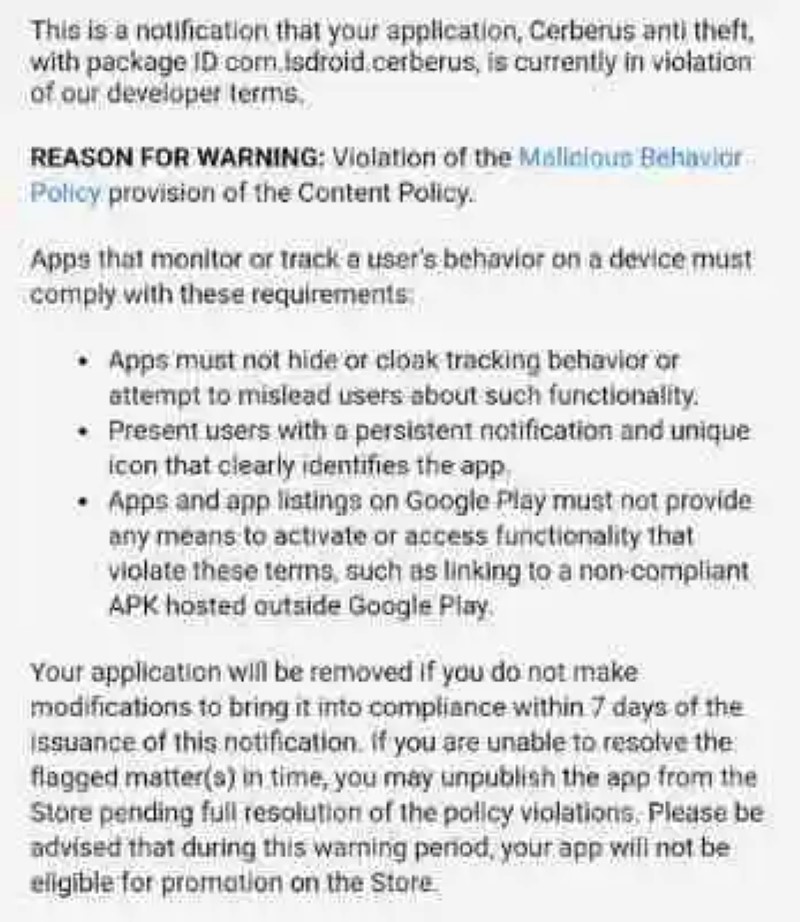 One of the functions offered by Cerberus, just like many other apps, anti-theft, is the of track the location of our mobile phone when it has been stolen, an option that gives no guarantees but it could be of great help to get it back. It is true that Cerberus does not notify the user that it is doing a follow-up of the location, and here is the delicate point to Google.

In the notice they have received in Cerberus, Google specifies that the app can’t hide the tracking of the location and should show at all times a permanent notification with an icon that identifies the application. The detail that the company has not taken into account is that, in such a scenario, the mobile user is actually the thief’s mobile. If we have been advised that it is being tracked it will not be useful to have Cerberus installed.

Cerberus has seven days to make the relevant changes or run the risk that the application be removed from the Play Store. Its creators have shown their disagreement through their Google+ page with this brief message: “So according to Google we should show a notification for the thief to know that you are tracking your stolen device ?”. Hopefully this time Google will realize that your request does not make too much sense.

More information | Cerberus on Google+
Xataka Android | Google Play Protect does not protect as much as we were promised: it detects less malware that other antivirus

–
The news Google wants the app anti-theft Cerberus to alert the thief of our mobile phone that is being tracked was originally published in Xataka Android by Amparo Babiloni .

phoneia.com (November 19, 2017). Google wants the app anti-theft Cerberus to alert the thief of our mobile phone that is being tracked. Bogotá: E-Cultura Group. Recovered from https://phoneia.com/en/google-wants-the-app-anti-theft-cerberus-to-alert-the-thief-of-our-mobile-phone-that-is-being-tracked/