After presenting at the last IFA the new processor Kirin 990, Richard Yu, CEO of Huawei, granted an interview some media which said that the u.s. government will “put in a position in which it is impossible to continue using the Google Mobile Services in future new products in the united States”. He added that, if this does not change, they will have to use your operating system HarmonyOS and that, perhaps, the first product to integrate it is the P40.

however, as we already know, the blockade imposed by the united States to the chinese manufacturer does not affect mobile previously launched for the company and they will continue to receive updates. In fact, in the above-mentioned event of IFA, also it was announced a new Huawei P30 Pro with Android 10 pre-installed. Now, in addition, has revealed the models that will receive the update and when they do it.

An update is slow and progressive 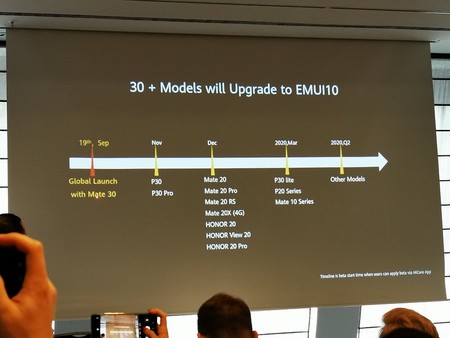 AndroidPit has posted today, at a press event, Dr. Wang Chenglu, President of Huawei’s Consumer Business Software) has shared the official calendar of the next major update of Android under the layer of EMUI 10 both models of Huawei like of Honor. From Xataka Android, we have been in contact with Huawei Spain to contrast the information and we are waiting for reply.

According to this calendar, leaving aside the future Mate 30 (which will be submitted to the September 19) and the aforementioned new version of the P30 Pro (which also come in new colors, it will come with Andorid 10), the rest of the models will begin to give the welcome to Android 10 in November.

in Addition, according to this calendar, the other models of Huawei and Honor (a total of thirty, according to AndroidPit) will get Android 10 and EMUI 10 from the second quarter of 2020, or what is the same, from April onwards. Let us remember that, at the beginning of the summer, both Huawei as a Honor already ahead of what models would be compatible with the new version of Google’s operating system.

[Updated: it’s official] A new Huawei P30 Pro is left to see in the IFA 2019 with two new colors and Android 10 pre-installed

–
The news Huawei announces the calendar of updates to Android 10 and EMUI 10 was originally published in Xataka Android by Laura Sexton .