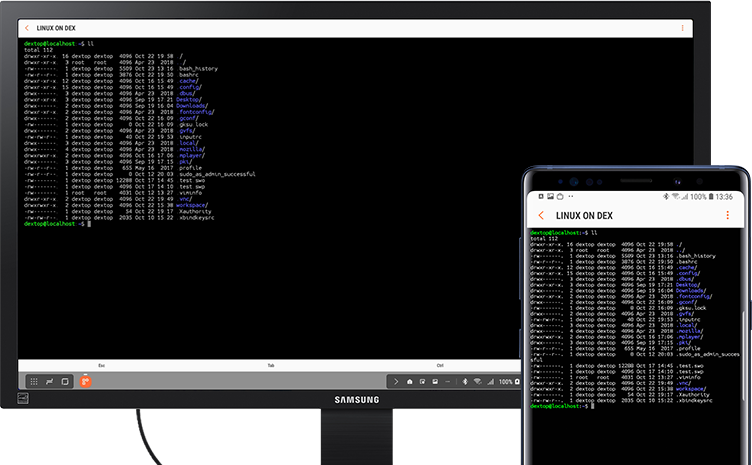 Years after Samsung launched the Samsung DeX to transfer all the contents of the mobile to an external display, the Korean company launched last November Linux on Dex, a program that allowed users of Dex run the Linux system in the environment DeX and that was only available in the Galaxy Note 9 and the Tab S4.

The app Linux on Dex was developed by Samsung and the company Canonical, focusing primarily on issues of development and programming, fields in which Dex was somewhat limited. And although the program is still in beta phase, has now begun to spread to different devices from the koreans.

Unlike what happens with DeX, available on Samsung devices from the Galaxy S8, the scope of Linux on DeX is much more limited. In fact, up until now was only available in the Galaxy Note 9, and the Tab S4, something that is about to change thanks to the new update of the application and support Galaxy S9 and S9+, Galaxy s10e netbook, S10, S10+ and

Samsung DeX Pad, a renewal in the dock changes its appearance and allows you to use the phone as a touchpad

The app Linux on DeX is in beta version and at the time of its launch, Samsung opened a registration process prior to test, although to day of today, the company no longer accepts new registrations. Although we have not been able to try it out, it is also possible to download the APK file on a mobile phone Samsung compatible, for what that will also need to have a Samsung account and another Google to be able to access.

Linux on DeX is currently in beta and has a pretty good performance, in addition to easy configuration and installation

Linux on DeX is focused on developers and was released with the idea of “freeing them from their desktops and allow them to have access to a Linux development environment similar to that of a PC in any time and place”, as announced by the company in its web page.

Although we have not been able to test it, the middle SlahGear yes it has and it ensures that your main asset in your easy configuration and installation, in addition to a performance “good enough”, although it has much room for improvement. Logically, it’s still in beta phase, so there is hope that these come sooner rather than later.

Samsung Galaxy Fold: all the details of your first mobile folding

–
The news Linux on DeX is updated and comes to the Galaxy S9, S9+, the S10 and the Tab S5e was originally published in Xataka Android by Brenda Macias .