Starts a new season in Mario Kart Tour centered in Paris, the city of lights. Come the challenges of the 1st week as well as new additions to the runs of the pipes.

now available in Mario Kart Tour the new update that takes us to Paris, the city of lights. Starts one more season, the fourth on this occasion, with new challenges by completion and updates as new versions of characters to the pipe, vehicles, and more. Are you going to lose?

Paris, from the 6th until the 20th of November

The Paris tour is here and Peach is dressed for vacation! It looks like she’s enjoying her time in a city full of fine art! #MarioKartTour continues sti journey around the globe in the Paris tour until 9:59pm PT on 11/19. pic.twitter.com/5Thm3BqRfh— Mario Kart Tour (@mariokarttourEN) November 6, 2019

As we expect from Nintendo in the policy updates of Mario Kart Tour, the players can already download the new version of the game, that it occupies in our mobile devices about 102MB. The update brings the Tour of Paris Mario Kart Tour and we will be able to enjoy this season a total of two weeks (again, no surprises in this aspect). In particular, the season in Paris has started today same day on 6 November at 07:00 p. m. time of the peninsula, and will extend until the 20th of November at the same time.

► X Best Services for Students pixabay.com The student often has to wri...
► Apex Legends will receive a mode ‘battle royale’ in solitary for a limited time The event Iron Crown Collection begins Augus...
► Interesting Stories Behind Expensive Cars in Dubai One of the main features of Dubai is people...

All the challenges in the 1st week of Paris

One of the major developments that brings with each new Tour are the challenges of season. Small goals that challenge us to perform certain actions in our careers and that we awarded several prizes as may be the coveted Maxiestrellas. The first week of challenges this season Paris has already been unlocked, and these are the challenges to be met:

The second part of the challenges will come in the second week of the season, the 13th of November.

Challenges of the Pass-Dorado of the season

The players that have paid for the Pass Gold, the monthly subscription 5.49€ Mario Kart Tour, also have their own unique challenges during this season. Since they are all available and are the following:

on the other hand, come as news to the pipes in the game. The characters added this season to the already extensive list of pilots, there are 3 new versions of old acquaintances. In particular, these:

Each one of these runners will have as you see your skill special and its own circuits enabling, among which is the great novelty of this season, the Boulevards of Paris, a perfect place for visiting the beautiful streets of the city of paris. In addition, also have added new vehicles as the Locomokong dorado, the Aerodinamicus, the Turbobulbo and the Macaron Strawberry. And in the section of hang gliders we have the Wing Tricolor and the Crepe of Strawberry.

Awards with the season pass 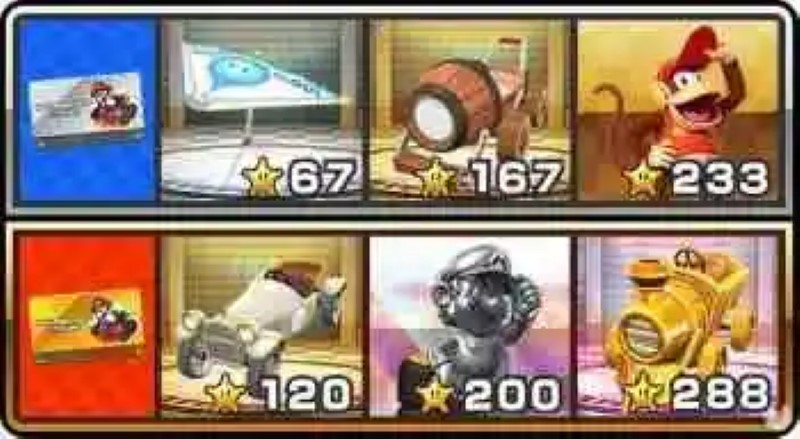 This time the awards for the season pass standard are related to Diddy Kong. While the Pass-Golden have of its protagonist the Mario Metal. You can see all the prizes in the pass on the image that is on these lines. You will need get many Maxiestrellas to ganároslos.

Remember that if you need help for your Mario Kart racing Tour, you can visit our complete guide with articles that will serve you to win all the cups and complete challenges. It has been recently announced a multiplayer beta exclusive for players to Spend Gold to open in the month of December.

A new game for the NES gets its funding in just 16 hours
Is the platforms Alfonzo's Arctic Adventure.crowdfunding in Kickstarter is...
The season of Fortnite will end with a battle between giant monsters
A creature and a robot that will begin to build will end up squaring off i...
‘The hunter and Ice Queen “is crowned as the highest grossing
C.RULL 'The Hunter and the Ice Queen' grossed 1.2 million in the Spani...
The Xiaomi Mi Band 4 is again filtered and points to a colour screen and support for voice commands
One of the wearables more popular, particularly when we talk about brac...
Bibliography ►
Phoneia.com (November 6, 2019). Mario Kart Tour: challenges of the 1st week of Paris and novelties already available. Recovered from https://phoneia.com/en/mario-kart-tour-challenges-of-the-1st-week-of-paris-and-novelties-already-available/

This article was published by Phoneia, originally published in English and titled "Mario Kart Tour: challenges of the 1st week of Paris and novelties already available", along with 18988 other articles. It is an honor for me to have you visit me and read my other writings.
◄ Is it time to give Amazon Prime?
Tips on recycling: This is what you do not do well ►