More than nine million players have participated in the beta of Star Wars: Battlefront

DICE has confirmed.
EA and DICE have confirmed officially that more than nine million people have played and enjoyed the recent beta your next game Battlefront Star Wars: Battlefront
Sigurlina Ingvarsdóttir , producer of the title, said: “It has been beta greater participation in the history of EA “. He continued: “Since we announced Star Wars: Battlefront last April, it has been one of the most recurrent and commented on the video game world during the last six months issues and has been exciting (and a little stressful if I am completely sincere) open to everyone “
The producer, he has continued in its praise players who participated .” As Han Only during the final of ‘A New Hope’, we are delighted that you’ve dropped . Even more important than let you see, was that you invested so much time playing, having a good time and leaving comments incalculable value to continue adjusting and balancing the game to launch. “
” On behalf of the team at DICE, and all members of EA, thanks for playing “.
Star Wars: Battlefront will be a multiplayer action game set in the classic trilogy that will allow us to participate in battles of up to 40 people either walk or fighting on vehicles and ships.
The launch is scheduled for November 19 on Xbox One, PlayStation 4 and PC.
Video: 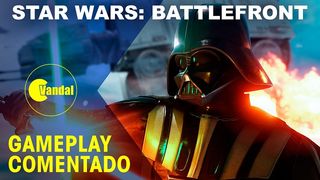