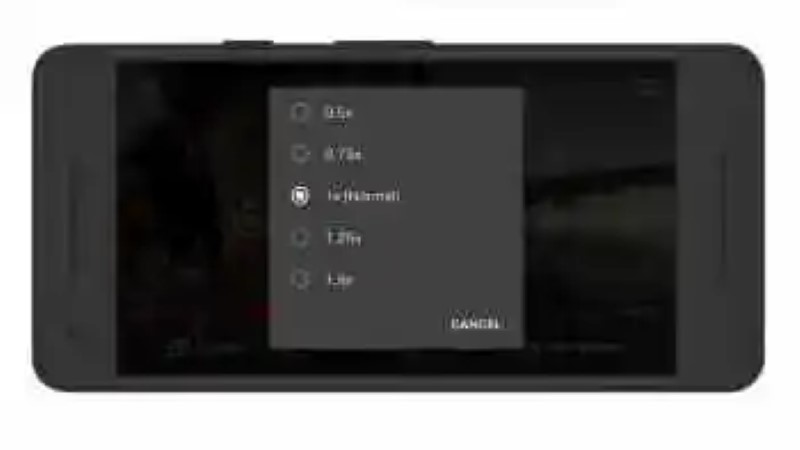 Netflix responds to criticism after testing the option of playing back content at a higher speed
If you're one of those people with little free time, or fond of listening to podcasts and watching series and mov...

If you’re one of those people with little free time, or fond of listening to podcasts and watching series and movies, accelerated, Netflix have good news for you. And is that the streaming platform takes a few days doing testing on Android devices consistentadd a function that allows you to speed up and slow down the playback speed of the content to the liking of the consumer.

The speeds in question, similar to that which we can select players online such as YouTube, will be – 0.5 x, 0.75 x, 1.25 x or 1.5 x, and are equipped with an automatic correction of the pitch of the sound so that the voices don’t sound distorted —too severe or too sharp— regardless of the speed of their issuance.

there have been Many voices that have risen up to praise the decision —there are people who want to watch the world burn, and is in their right to do so— while, on the opposite side, filmmakers like Judd Apatow or Peyton Reed have shown their displeasure at the alleged “improvement” of the service in testing, as can be seen in the following tweets.

This is a terrible idea, and I and every manager I know will fight against it. you

it All depends on the feedback that is received

because of the criticisms, the vice-president of service of Netflix, Keela Robison, has spoken on it by using the following statement:

“Usually we test new tools that could help to improve Netflix. In the last month, we have begun to test various additional controls, including the speed of viewing on mobile devices. It is an option that has been available since long ago in DVD players, and that has been requested frequently by our partners. For example, people want to see your favorite scene, or to go more slowly because you are watching a movie in a foreign language.

We have been sensitive to the concerns of the creators and we have not included larger screens, televisions specifically, in this test. We have also corrected automatically the pitch of the sound at speeds faster and slower. In addition, partners must choose to vary the speed every time you see something new in place of that Netflix keep its settings based on your last election.

we have No plans to give out these tests in the short term. And that we may add these options to all over the world at some point in time will depend on the feedback that we receive”

In my terms, finished adding this feature, do not use in any moment to see a series or movie at full speed —the playback -0,5 x is another thing, that to learn things installation and planning is always going of pearls—, but it is always good to have additives that give flexibility to the viewing experience. Do not plan to tear the garments with any novelty, no matter how inadequate that may seem.

The first few reviews of 'The irish' speak of a masterpiece: "it Is the culmination of the obsession with Scorsese in the genre"

'the House of The flowers': the trailer for the season 2 of the culebronazo Netflix presents its new characters

–
The news Netflix responds to criticism after testing the option of playing back content at a higher speed was originally published in Espinof by Victor Lopez G..

Mobile ODIN Pro 4.0, flashing modems, Download mode and support for KitKat
Mobile ODIN Pro is a modified version for Android phones by the famou...
New Gmail 4.7. Now we can attach any file type, auto answer, Google Cloud Print and more
If you are of those who are all day glued to our Android device to rea...
How to restore a backup in WhatsApp for Android
WhatsApp has spent years creating backups, but it was not until 2015 ...
The Google Play Store and Play Books activate your dark theme
When Google renewed the past month of August, the Play Store with your ...
Bibliography ►
Phoneia.com (October 30, 2019). Netflix responds to criticism after testing the option of playing back content at a higher speed. Recovered from https://phoneia.com/en/netflix-responds-to-criticism-after-testing-the-option-of-playing-back-content-at-a-higher-speed/

This article was published by Phoneia, originally published in English and titled "Netflix responds to criticism after testing the option of playing back content at a higher speed", along with 18989 other articles. It is an honor for me to have you visit me and read my other writings.
◄ Retro Studios tab to an artist from Halo to Metroid Prime 4
Ecological heroes: Reusing food waste ►