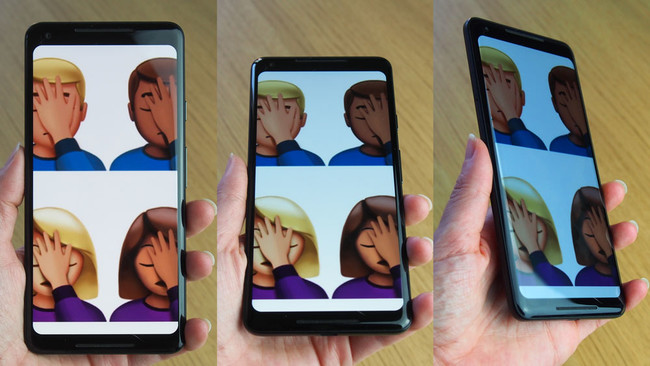 The Pixel 2 XL is one of the Android phones more complete picture, but its launch was marked by the problems of your OLED screen. Muted colors, burn-in and viewing angles that azulean as we turn a little mobile are the problems more pronounced.

however, while the calibration of the color was settled with a software update in which he also functions to prevent burn-in, the blue tint of their angles of vision is still present, but now we know that does not affect all models of the Pixel 2 XL.

In a recent video, youtuber Jerome Ortega’s account of his experience with this topic. Ortega already had a Pixel 2 XL, but recently bought a new drive and to his surprise, there was little trace of the damn blue tint when you view the screen from angles.

But it is not the only case. Vlad Savov, editor at The Verge, the same happened when comparing two units of the terminal “made by Google”. the does this Mean that the problem is fixed and the Pixel more new they come with a new screen? According to Savov, has nothing to do with the date as the unit with display ‘good’ had been assembled in October and there are still complaints made models in December, so it seems that it is a matter of luck.

Not all Pixel 2 XL displays are bad. Some lack the annoying blue shift. pic.twitter.com/p8RgkEbztF

When was the problem detected is already spoke of that did not affect all units equally, but it seemed that the shade of blue was something common in all of them. Our unit does have this problem, but we have not detected any burn-in to the panel, and the problem of the muted tones was fixed with the update. If you have a Pixel 2 XL you can leave your experience in the comments.

Via | The Verge, Jerome Ortega
Xataka | Pixel 2 XL after a month of use: the camera I fell in love with, the screen I broke your heart

–
The news Not all of the Pixel 2 XL have the problem of the screen with viewing angles of blue was originally published in Xataka Android by Amparo Babiloni .