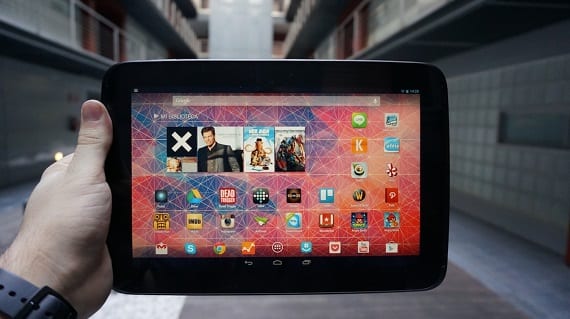 drabs arrive URLs with the new version of Android so you can update your Nexus devices as today was for Nexus Nexus July 2013 and July 2012. Now is the right time for the tablet Nexus 10 that since tonight KitKat you can enjoy it.

If you have no patience and want to hold your tablet updated to the latest Android version, you will have only follow the steps below will show, that in less than the blink of an eye, you may have installed Android 4.4 on your Nexus KitKat 10.

After updating the Nexus devices mentioned, leave only cellular data versions of the Nexus 7 and the Nexus 4, which according to Google said today, will arrive in the next few days, perhaps the delay may be more of a problem for drivers than anything else, as mentioned in a forum of experts.

More or unless steps are the same as I have related previously Nexus updates in July 2013 and 2012.

Remind you that you have the launcher Google Experience exclusive Nexus 5 it, provided that you have Android version 4.4 on your Nexus.

In order to complete the process to flash your Nexus July 2012 version Wi-Fi will need to have Android SDK installed . The SDK contains the latest version of adb and fastboot , which are indispensable to make the update process.

microUSB cable ‘ll need to run adb sideload , and you will not need if descargáis OTA ZIP file directly to your tablet and install from the recovery.

For this OTA work need to install version of Android 4.3 JWR66Y.

This method does not delete data because it is as if actualizarais OTA.

Adb sideload Use the ZIP file you have downloaded following the steps which I noted in this tutorial . If something fails, try restoring system files that have been changed or wait for the factory image.

If you want to know any of the details behind this new version for Android you can go to this article . If you want to try the whole Google experience do not forget to try the Launcher Google Experience with transparent navigation bar and Google Now integrated on the same desktop. More – Nine Android 4.4 features not so well known KitKat

Download WordPress Themes
Download Premium WordPress Themes Free
Free Download WordPress Themes
Premium WordPress Themes Download
udemy free download
download karbonn firmware
Download WordPress Themes
udemy course download free
Now for the tablet Nexus 10: download and install Android 4.4 KitKat (KRT16O)
Elena Anaya finished shooting the sequel to ‘Zip and Zap’, which assumes the role of villain
EFE This weekend concludes the filming of 'Zip and Zap and captain Isl...
Disney prepares a series of ‘High fidelity’ but with a female protagonist, and for the whole family
The industry seems to have found a gold mine in the change of male charac...
Oscar: ‘Joker’ is the adaptation of comic books most nominated of the history, and the first DC candidate to the best film of the year
Of the many surprises that has left us the list of nominations for the ...
‘Better Call Saul’: the first trailer of the season 5 unveils its premiere
The fourth season of 'Better Call Saul' came to an end on the 8th of Octo...