Paladins: Champions of the Realm starts its open beta on PC

We will give away 1.000 keys for the champion Evie and a skin of Black Ice.

Hi-Rez Studios has announced that their new video game free shooting competitive teams, Paladins: Champions of the Realm, has entered the official phase of open beta. Announced a little over a year, Paladins can already download from Steam. 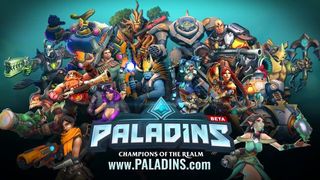 Paladins: Champions of the Realm is a game of first-person action with touches of MOBA that will be released for free on PC, PlayStation 4 and Xbox One, while the open beta is only on the first platform. This new trial period comes with a variety of settings, as a new departures lounge, 17 champions different, an extra map and new skills. According to confirmed Hi-Rez Studios, the game was developed thinking in the eSports, offering servers are stable and support for relay games.

Paladin is the new title of the creators of SMITE, and on this occasion, bet for the first-person action and the exchange of shots by teams

“Since the beginning of the closed beta last year, we’ve been improving the game and the player experience,” said Todd Harris, director of operations and co-founder of Hi-Rez Studios. “Paladin it is a shooting game by teams with a fantasy scenario, a sense of humor and a high degree of customization and strategy. Paladin is always will be a free-to-play and with the open beta anyone can download it from the web page of Paladins or Steam. We are eager to continue to shape and improve the game with a community even greater.” The open beta of Paladins: Champions of the Realm will have achievements on Steam, and even, be offered skins special of Team Fortress 2.

Distribution of keys in Vandal

To celebrate the launch of Paladins: Champions of the Realm, in Vandal we offer the possibility of getting codes for the game, thanks to their creators, we will unlock the champion Evie and a skin special to the champion Black Ice.

Paladins: Champions of the Realm starts its open beta on PC
Google hides a mini-game of tennis in your search: this activates
Google does not waste the occasion to include minigames in a good part ...
‘After Life’: Ricky Gervais puts a date to the premiere of season 2 on Netflix
Netflix announced the renewal for a second season 'After Life' just a f...
Borderlands 2 VR will add for free all your downloadable content
Captain Scarlett and her Booty Pirate, The Bloodbath Bloody Lord's Vehicle...
Belkin expands its line of nylon cable rugged USB-C and Lightning
Belkin has launched a new line of cables, Lightning and USB-C. The new cab...