Remember, today begins the program of replacement of the Note 7 in Spain 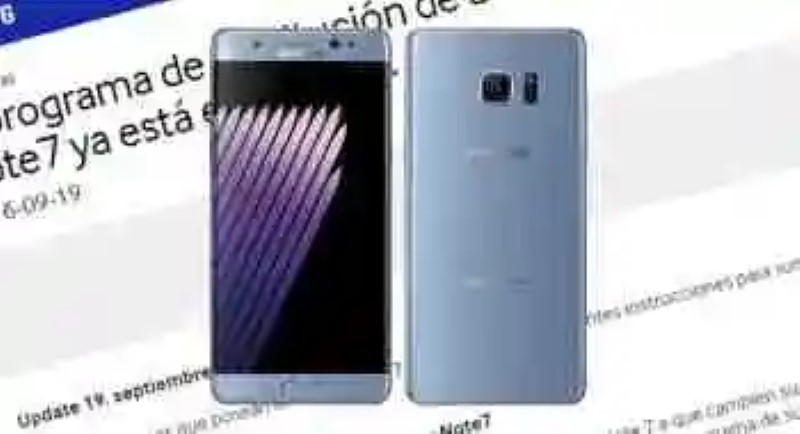 Remember, today begins the program of replacement of the Note 7 in Spain
The battery of the Galaxy Note 7 is one of the hottest topics -and never better said - of this end of the summer, a...

The battery of the Galaxy Note 7 is one of the hottest topics -and never better said – of this end of the summer, and is that an anomaly in the manufacturing of the batteries will cost to Samsung billion dollars and a recall global. Although Samsung has created one page to check terminals affected by comparing the IMEI and the information is also available in the application Samsung+ (only US or APK Mirror), some people, against all logic are reluctant to return your terminal.

do you Have a Galaxy Note 7 in your possession? If so, it is best that you review the latest official release from Samsung about the topic to your country (Spain, México, other). The main idea is the same in all countries (not to use the phone, to join the exchange program and get a new Note 7 or other) but change the timelines and specific details. For Spain, the program of replacement of devices begins today.

► The best android apps for reading comics I confess that since I saw the first tab...
► Headed South, the first game to Motion Sense of the Pixel 4 comes from the creators of Monument Valley The Google Pixel 4 are already among us, ...
► A third of the Spanish states that you have ‘hacked’ the mail or that have leaked your personal data Three of every four spaniards claims to have...

What do you do?

Such and as you commented when the replacement programme for Spain was announced for the first time, you must go to the point of sale location where you originally purchased your terminal if you bought it in a physical store, or call toll-free at 900 100 807 or write to [email protected] if you bought it in the official store of Samsung.

At that moment you need to choose. If you’re still determined to continue with a Galaxy Note 7, this time with a new and shiny battery that obviously should not cause any problem, you can sign up to receive your replacement. The date for the replacement officially begins today, which does not necessarily mean that you have a Note 7 new today. For the days of delay Samsung will be a Galaxy S6 if you don’t have any other mobile phone.

on the other hand, if all of these riots and the inconvenience you have done that I’ll pick up something for mania the Note 7 or perhaps after using it a few days, you’ve restated, if you really interests you, you can with immediate effect get a Galaxy S7 or Galaxy S7 Edge, in which case you will return the difference price between the two devices.

you Already know, therefore. the turn Off your device, pick up the phone (the other, of course) and called the number of information free of charge Samsung 900 100 807. We already know that lazy, it’s a hassle, and Samsung does not seem to have thought of recompensing you for the inconvenience -that we know – but safety is first. In this regard, by the way, it is curious that Samsung US promote the use of tools to check IMEI if the device is affected while Samsung Spain this will give the same: the recommendation is not to use the Note 7, turn it off and return it. Affected or not, just the same.

More information | Samsung
In Xataka Android | ¿Can the program return for a massive Note 7 have set a precedent?

–
The news Remember, today begins the program of replacement of the Note 7 in Spain was originally published in Xataka Android by Ivan Ramirez.

Battalion 1944 announced a multiplayer action game for PC, PS4 and Xbox One
It will be financed through Kickstarter Bulkhead Interactive has announ...
Special: The evolution of Android, from the beginning until now (Part 1)
Android has experienced a radical evolution both in the same operating ...
‘The man in your life’ will be the replacement of ‘Tell Me’ to Thursdays
Yesterday a farewell season of the great veterans of national fiction....
The game browser OGame celebrates 15 years
The German game is one of the biggest hits of their sector.OGame, one of t...
Bibliography ►
Phoneia.com (September 19, 2016). Remember, today begins the program of replacement of the Note 7 in Spain. Recovered from https://phoneia.com/en/remember-today-begins-the-program-of-replacement-of-the-note-7-in-spain/

This article was published by Phoneia, originally published in English and titled "Remember, today begins the program of replacement of the Note 7 in Spain", along with 18986 other articles. It is an honor for me to have you visit me and read my other writings.
◄ Paragon displays your graphic section in PlayStation 4 Pro
How to turn off the read receipt, the tick, blue, Twitter ►