More than 1,300 players have competed online at Ford dealerships.
Since early November has been held in 21 Ford Stores in Spain Ford Performance Championship , where they have 1,315 players competing online. On Friday afternoon the eight runners Rated met in the offices of Microsoft in Madrid to dispute the final, in which they won the victory veteran competitor driving simulators Jesus Sicily, who 1,500 euros a limited edition console Xbox One Forza MotorSport 6 , a place to participate in 24 hours Ford and a batch of 7 games Xbox One .
Before the semifinals a small round table was held with the participation of Manuel Moreno, Bussiness Development Director of ESL in Spain (as this company relay e- organized sports infrastructure and broadcast the championship final); Victor Piccione, communication manager of Ford in Spain and eight finalists: Jesus Sicily, Sergio Gurdiel, Gian Marco Segura, Miguel Molina, Angel Borrego, Miguel Ballester, Cesar Garcia and Ruben Fanarraga . Piccione spoke of the Ford GT, which makes this year’s 24 Hours of Le Mans, the competition that reigned in the sixties. In fact, in 2016 marks the 50th anniversary of the crushing victory of the Ford GT 40 to be the model that led all drivers on the podium. The semifinals and
the end of the Ford Performance Championship were played at three races at the Circuit de la Sarthe in Le Mans (France), variant Bugatti: the first rain, the second night and the third day and dry to check the skill of the players in all conditions. Another constraint was that could not modify the car , which suffered no damage during Competition-, but each rider decided the driving aids he used. The control was hand drive, which could pose a problem for those used to using the remote players.
Cesar Garcia, responsible for Forzamotorsport.es and also served as caster during the final when not racing, explained that in rainy conditions had to be careful with the aquaplaning in puddles and night races are driving slower “because the asphalt temperature is lower and the tires have less grip, “he said.

The third race of the final was intense and exciting

After playing the two semifinals, Jesus became the final Sicily, Gian Marco Segura, Ruben and Angel Borrego Fanarraga. In the first competition of the final Fanarraga he came in last place but it was going up positions and won the victory, followed by Borrego and Sicily. In the second race Fanarraga Borrego racing for second place when the latter came out. Sicily was the winner, followed by Fanarraga, Segura and Borrego. 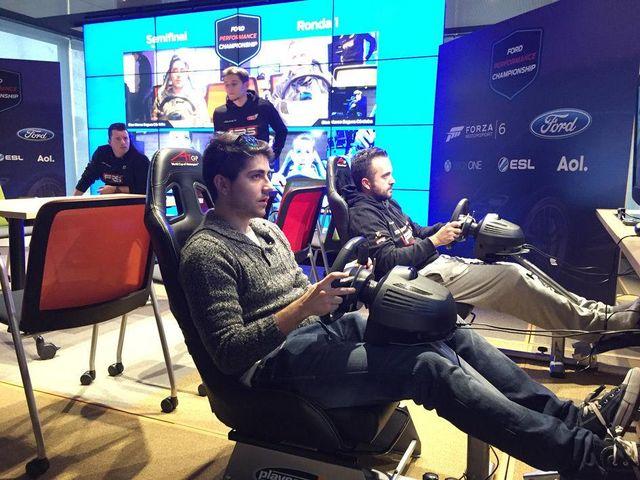 decisive race was exciting in the second half, with a third round of stroke in the first three -Sicilia, Borrego and were Fanarraga- in a handkerchief, in some sections Sicily and Fanarraga, knowing that who had won the title, or a meter is not carrying. In the last bend both slightly lost control and the victory went to Sicily which was proclaimed champion of the championship with 26 points, Fanarraga placed second with 24, Borrego third place with was Segura got 20 points and was in fourth place with 14 points. Between 250 and 300 people watched the broadcast online final for ESL at its main channel.
Jesus -of Sicily DarContigo Racing Team- team did not employ driving aids and used the Interior view of the car. He is a player with a great track record in virtual motor racing despite having only 22 years. Coming from Almería, learned of the existence of the Ford Championship Performance by chance, when I commented a few friends. In the previous roundtable competition wing said he was surprised with the requirement of Forza MotorSport 6 as a driving simulator: “I did not expect so much,” said
In other games. Driving has achieved outstanding victories like national championship GT Academy 2012 Gran Turismo , year in which he was also a finalist in the same European competition. He has achieved several championships with

Report: Jesus Sicily Performance Ford Championship wins
Tried android auto carplay and the new Volkswagen Touran
Android Auto and carplay reach Spain massively in the new Volkswagen ...
Chrome 80 will prevent the web pages to bother asking you to send notifications: this is how it works
Lately to visit any web page supposed to close four or five windows wit...
How to prevent an app to automatically update
There are those who prefer to have all applications updated automatic...
OnePlus X Champagne, announced the new white color that goes on sale next week
The Chinese manufacturer OnePlus provided celebrates its second an...