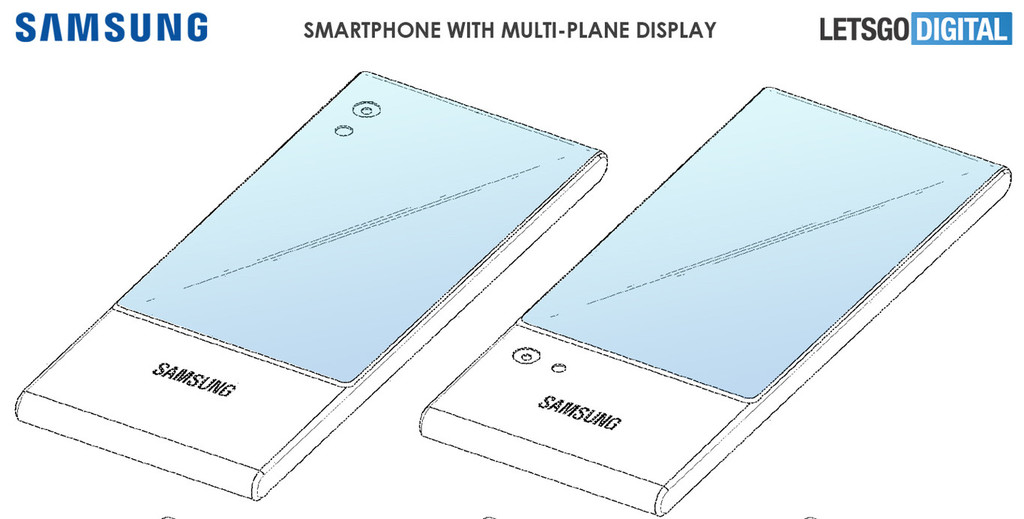 Get a front of the mobile the entire screen is one of the main objectives of manufacturers of smartphone and Samsung does not want to fall behind. After the past month of February his flip phone Galaxy Fold, with the consequent problems later on durability of your display, the hyundai brand does not cease in its efforts to offer different phones in the screen copper the lead role.

Proof of this is the patent to create a mobile phone with a screen enclosure introduced in 2016 and that he obtained just a few days ago. It shows a different design to anything seen until now, which new features are added. Logically, it is only a patent and may never see the light, but only the proposal already is more than eye-catching.

Samsung Galaxy Fold, first impressions: the continuous feeling of holding the mobile of the future although there is work to do

The screen that starts before and ends up back 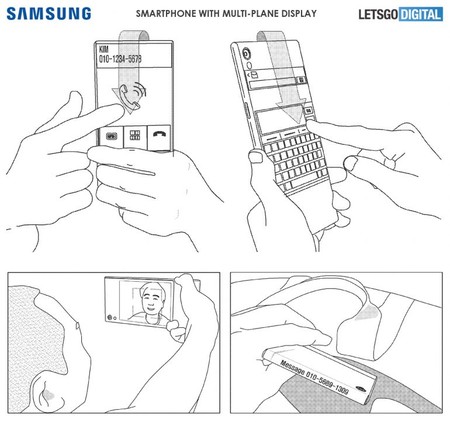 The idea is proprietary to Samsung reflects a screen enclosure that starts at the front, continues on the top and ends in the rear area. In this way, we would have to three screens in the mobile that would work independently.

The three screens work independently, although they could be activated simultaneously to execute different tasks

The screens could be activated simultaneously and would have the same features. That is to say, with a single touch could change your applications at any screen, since there would be no difference in activity between the screen in front of you and behind.

yes, this is not a mobile folding the style of the Galaxy Fold but rather a smartphone double-sided with different screens. So, the screen would occupy the entire front of the phone and three-quarters of the rear area, leaving space to catch the device with the hand.

For its part, the upper zone would be dedicated to notifications to display general information. When you drag this notification from the smaller screen to either of the other two, it would open the app corresponding automatically. 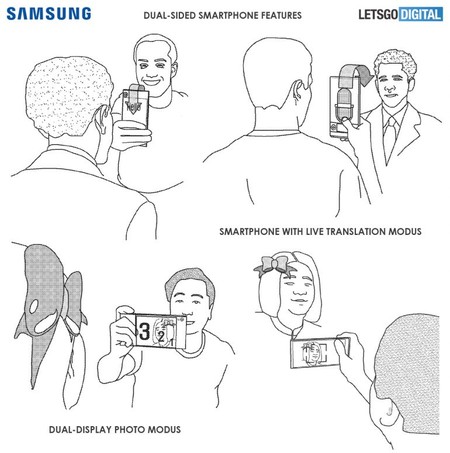 And what about the buttons and the camera? Although the illustrations show a physical home button built into the screen, in the description of the patent infers that it could be virtual. Regarding the camera, it would not be necessary to have a camera for selfies as these could be made with the main camera located in the rear area.

The mobile phone would include features such as real-time translation, or the possibility of displaying a photo on the two screens for viewing simultaneously two people

But the patent Samsung picks up a lot more than the design itself and adds attractive features. Perhaps one of the most interesting is the arrival of the real-time translation, so that two people could talk about -and understood – in different languages as they would see on the screen the translation in their own language. The idea of Samsung is to add in addition to special options of the camera such as the possibility of making a picture with the camera and display it on two screens, so that two people can view the resulting image on the respective screen.

As we say, Samsung had registered the patent in 2016 and has recently obtained. Will we see this mobile with screen enclosure in the market? What is certain is that we do not know the intentions of Samsung to carry it out because the mere fact of obtaining a patent, does not mean that the product reaches to see the light.

The Samsung Galaxy Note 10 will have a Pro version with battery of 4,500 mAh, according to Ice universe

LG, Huawei, and Xiaomi are already working on multiple cameras for selfies

–
The news Samsung has patented a mobile phone with a screen enclosure of three sides was originally published in Xataka Android by Brenda Macias .

Download Premium WordPress Themes Free
Download WordPress Themes
Download Best WordPress Themes Free Download
Download Nulled WordPress Themes
udemy course download free
download karbonn firmware
Download WordPress Themes Free
lynda course free download
Samsung has patented a mobile phone with a screen enclosure of three sides
How a Virtual Phone System Can Improve Communications?
Communication is the key ingredient of every business’s success. With r...
Honor X3: a 6.2-inch tablet could be the star of Huawei at CES
As some already know, this week starts CES in Las Vegas . The first...
The creators of Metro Exodus thought that developing it was ‘impossible’
Have counted with the support of the author of the novels.The developer 4A...
The documentary ‘I Am Your Father’, about the actor who gave life to Darth Vader, will debut in Sitges
EP The film is directed by Marcos Mallorcan Cabotá and Toni Bestard. ...