Samsung resumed the update to Android 8.0 Oreo for the Galaxy S8

A few days of the presentation of the Samsung Galaxy S9, the south Korean manufacturer takes advantage of it to reactivate the update to Android 8.0 Oreo that had stopped for the users of the Galaxy S8. Almost all years something similar occurs and it is that until the arrival of the new flagship, it does not update the previous.

The update to Oreo for the Galaxy S8 was arrested a few weeks ago due to a few reboots unexpected that were being examined. Now this bug seems to have been corrected and it has proceeded to resume the upgrade, which this time we hope to be the final and not to be detained again.

If you have a Samsung Galaxy S8 we advise you to click on the button check for updates. In particular, the Galaxy S8 and Galaxy S8+ should be receiving Android 8.0 Oreo with the numbers of firmware G950FXXU1CRB7 and G955XXU1CRB7.

The update has been seen for German users, but it should be distributed via OTA at least all over Europe. 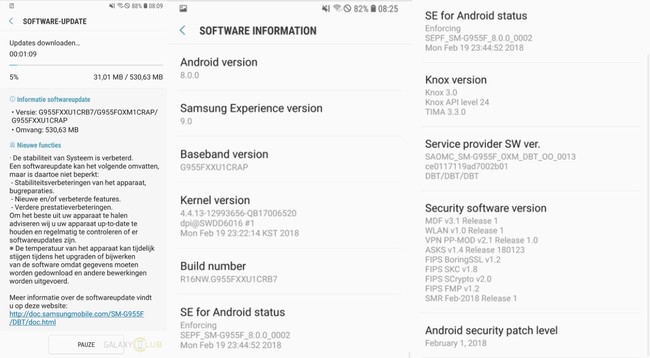 users of a Galaxy S8 Duos have received an OTA on Oreo that takes up 530MB, but for users who are still in Nougat, the update will exceed the 1GB of space.

in Addition to changes in Oreo for all, this update incorporates the Samsung Experience 9.0 for the Galaxy S8. Add new emojis, improved search, automations and applications dual.

Via | SamMobile
Xataka Android | ¿Will update my mobile to Android 8.0 Oreo? The complete list up-to-date

–
The news Samsung resumed the update to Android 8.0 Oreo for Galaxy S8 was originally published in Xataka Android by Enrique Perez .