So cloned ‘Orphan Black’ Tatiana Maslany, and other series with double and evil twins 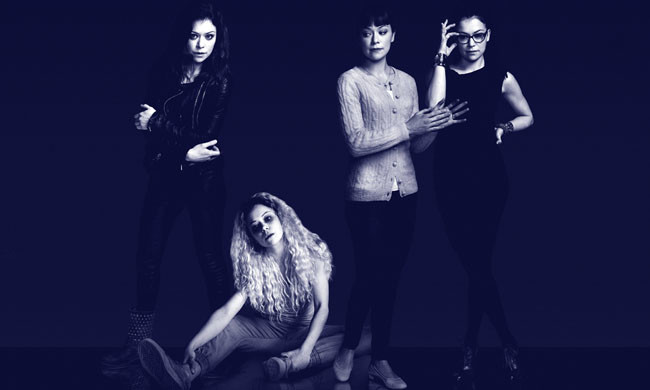 Surely more than once, see ‘Orphan Black ‘, I have asked How is it possible to share the same stage four characters who plays the same time Tatiana Maslany (on the other hand, it is easy to forget that we are seeing the same actress, but that’s another topic). Those moments are very good on screen, but represent a significant technical challenge for the series, and for anyone looking to do a scene with twin or double or clones.

Traditionally, when an actor has to play his doppelganger, split screen technique is used; first scenes are recorded with a character, then another, and then bind both post-production. The problem with this is that both characters can not physically interact; They can talk and look, but touching becomes difficult, as it somehow. That way we could see both Katherine and Elena in ‘The Vampire Diaries’ , and could also share scenes and the protagonists of Fringe and alternate versions.

When we saw several copies of the same cylon model Battlestar Galactica , the same technique was used, but the hardest part is still to make these identical characters can do more than just talk among themselves. And here come into play face substitutions CGI (which is like ‘The Social Network’ “created” Winklevoss twins) and double (tactical ‘The Following’ to also have a twin brothers in season). And then there is ‘Orphan Black’ .

At this point, we are all familiar with the premise of ‘Orphan Black’ ; Sarah is one day with another physically identical to it, you throw the train right before your eyes woman. He decides to steal her identity for a few days out of the problems in which it is stuck, and just discovering that this woman and she are actually clones , and there are many more out there loose. Issued in three seasons so far, Tatiana Maslany has played so far ten of these clones, though only half are important characters in the series and therefore require further characterization work and deepening them.

One of the hallmarks of the title BBC America, which are also the fans favorite scenes are the interactions between the four main clones; Sarah, Alison, Cosima and Helena. In the video above you can see a condensed version of the process of filming one of those scenes , in this case, the moment when Sarah first meets Alison and Cosima. That summary version begins with Maslany playing one of the clones and two doubles, characterized as the other two, in charge of reciting the rest of the dialogue and complete the scene with her.

The process is repeated for each of the clones involved in the scene, and these tests are used to memorize the camera movements to do it. In the next step, and rolled back the scene with Maslany single , giving life to each character in sequence, and merge those three scenes later in post-production.

“Orphan Black” used all possible methods to create scenes of clones, including the old trick of rolling over a double of which only you look back. The double Maslany, incidentally, is another actress, Kathryn Alexander, who plays every scene with her. Both roles are exchanged and then Alexandre face is digitally removed and replaced by that of Maslany, what is explained in this video. Alexandre had a small role href=”https://youtu.be/rfC77BzANiA”> this season as a proleteana (those that you see the show, you know who they are).

technological part of all this is called Motion Control , and is an evolution of the technique used to integrate images made by CGI in real images. This Motion Control is actually robots used in assembling cars , whose movements, and speed are controlled by an electric motor, for example. These robots have been used in other industries and its basic principles have finished making the jump to the audiovisual. During the filming of ‘Gravity’ , in fact, the cameras were mounted robots of this type, allowing a much more precise movements than regular cameras. In the series of BBC America used dollies techniques, cameras adapted to this way of shooting.

A single series as “Orphan Black” has all the current techniques for a single actor interprets several characters, and everyone to share a scene and interact with them. In Spain we saw recently one of these duplications in ‘The ministry of time’ , en the fourth inning, but we will say no more to reveal the account over who have not seen it.

–
News So cloned ‘Orphan Black’ Tatiana Maslany, and other series with double and evil twins was originally published in Go Tele by Such Marina.

Download Nulled WordPress Themes
Free Download WordPress Themes
Free Download WordPress Themes
Premium WordPress Themes Download
lynda course free download
download micromax firmware
Download WordPress Themes Free
lynda course free download
So cloned ‘Orphan Black’ Tatiana Maslany, and other series with double and evil twins
doubleTwist erreicht Sync Windows alle Ihre Musik mit iTunes synchronisiert und mehr Integration
Eines der ältesten Musik-Player zu finden Surfen für Google Play i...
FlixOlé comes to an agreement with Disney to revive the series for Marvel cancelled by Netflix
In time he spoke of FlixOlé as the Netflix Spanish, but the impact of ...
Dan Harmon announces showering that ‘Rick and Morty’ has been renewed for 70 episodes
And we feared for their cancellation at a time without knowing if it was ...
The official game of The Amazing Spider-Man 2 Google Android comes to Play
I think I remember playing Spiderman games since I was little, though...