The console will arrive on the 29th of September.

Super Nintendo: Nintendo Classic Mini will be launched on the 29th of September. Nintendo has confirmed official launch of their new special edition of the machine of 16-bit over sold, and while it will bring some surprises in the form of games, such as the unreleased Star Fox 2 (although there are some which we are missing), have yet to open the bookings in a formal manner.

Super Nintendo: Nintendo Classic Mini still can’t buy or reserve official in Spain. The console still does not appear listed on sites such as Amazon, GAME, FNAC or Corte Inglés.

however, and in light of the success of NES Classic Mini, I recommend that you be very careful, because the units could be similarly limited as in the previous model, which ended up being the meat of speculators. In some countries and Amazon affiliates, I warned, would be reserving a unit for the person to avoid this type of behavior.

When Super Nintendo: Nintendo Classic Mini is available in Spain, we will update the news on Vandal with price, promotions, and other items that you may acquire it without any complications. 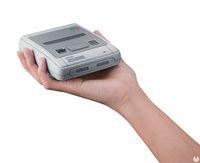