Today I talk about the first game of Goku.

After several deliveries of this Summer Dragon Ball, finally today we are going to talk about that was the first game ever made of this series, despite not being particularly well known considering that you never got out of Japan, and its launch took place for the Epoch Super Cassette Vision, another console quite unknown among the public at large.

unlike what many might think, this was not an adventure role-playing, that was the gender that is most pronounced with the adaptations of this manga during the first few years (fighting games would take a few years to arrive, as we told you when we talked to you about Dragon Ball Z: Super Butoden), but of a Shoot em up classic top-down perspective.

In him, our goal was not to dodge all the projectiles and enemies that this would be a threat to touch us while we defended by attacking both with the Magic Stick as a throwing Kama Hame Hast aboard the Cloud Kinton, all to reach the end of each stage, defeat the boss on duty (they were basically the Sergeant Metallic and Murasaki, two of the enemies that Goku had to deal with in the Muscle Tower during the saga of the Red Ribbon) and claim one of the seven Dragon Balls.

As you can imagine, the title it was no wonder, with enemies that it was easy to confuse them with other elements of the stage and a collision detection that was water everywhere, so it was rarely clear when acertábamos and when we got hurt. 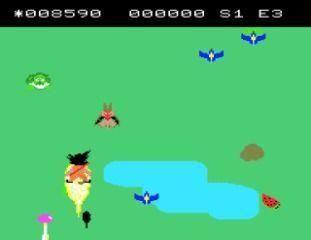 To make things worse, in certain moments of the adventure we had to do in front of Muten Roshi in a sort of mini-game of struggle where we could only jump and attack and praying that when we come closer, we don’t take a hit by chance and we could make an impact with several. This change of gameplay not suited him at all well to the title so badly led that it was, although at least noted the effort to break the general trend and give some variety to the development.

Obviously, during the normal phases, there were the classical objects, power-ups to make things easier. A detail quite interesting, and shows some respect for the series is the fact that Goku can end up hungry, reducing our attack power and the distance that you could drag the stick, so we had to worry about constantly picking up all the food we could see on the stage.

As the title was launched in 1986, the series was still taking their first steps, so that argumentalmente (so to speak) only covers the sagas of the first search of the Dragon Balls and part of the Red Ribbon, being one of the few titles that treat the children of this charismatic Saiyan. 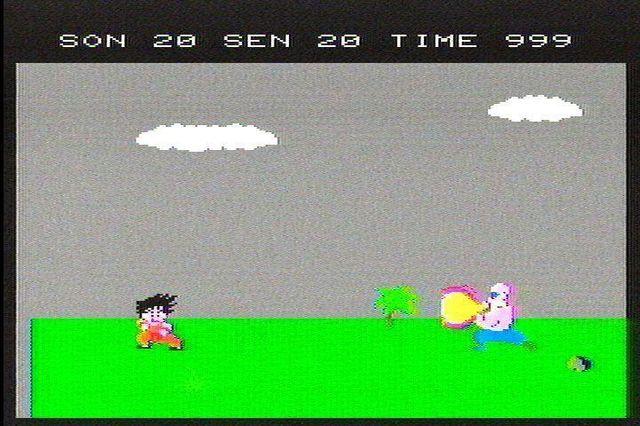 Graphically was not bad at all for the time and the platform is launched, because the characters were very recognizable, as are the scenarios that we were flying over. Probably best of all, the set was the soundtrack, which gave us versions MIDI of the original melodies of the anime.

Probably, the most attractive that he had Dragon Daihikyou was precisely to be the first game of Dragon Ball, which was the first time that you gave us (or at least the japanese public) the possibility to control Goku and adventure in the Dragon World, so a good thing we took him.