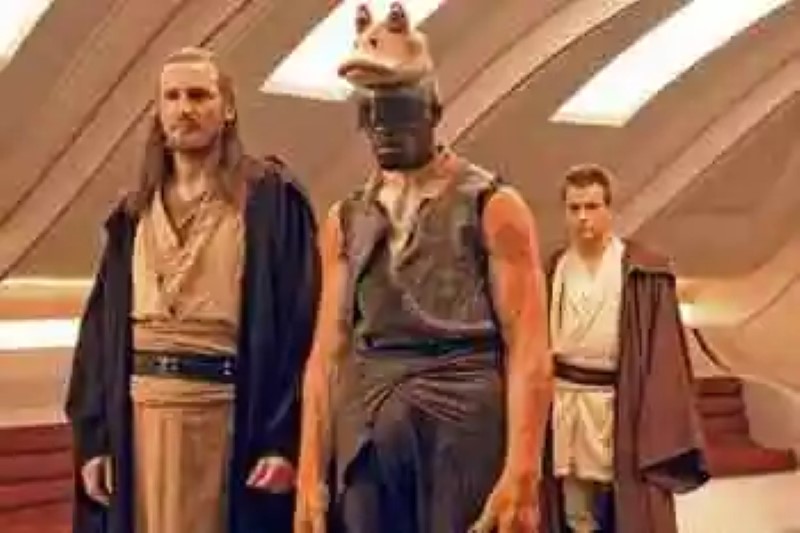 The actor who played Jar Jar Binks confesses that he was about to commit suicide because of all the hate it received
Jar Jar Binks is one of the characters most hated in the history of cinema, and not a few pointed out as the culpri...

Jar Jar Binks is one of the characters most hated in the history of cinema, and not a few pointed out as the culprit that George Lucas was destroying his galactic franchise. After ‘The phantom menace’ their presence was reduced and last year it was clarified what was your target. Yes, Ahmed Best, the actor who performed it, was also about to end really bad, because he came to think of suicide after what happened.

The performance of Best was shattered by the critics and by fans of Star Wars, and he was convinced that his career was not going to recover from that hard blow. Now about the 20th anniversary of the movie and the actor -and – musician has taken the opportunity to launch the following tweet recalling his experience:

► Minecraft Story Mode follows the 15 of August with his new chapter In addition, the 25, comes the first full se...
► TV series you should see if you like superheroes People saving the world, fighting crime...
► In Android P, the shared connection can be turned off if no one is connected In another episode of "but if this is what ...

20 years next year I faced a media backlash that still affects my career today. This was the place I almost ended my life. It’s still hard to talk about. I survived and now this little guy is my gift for survival. Would this be a good story for my only show? Lemme know. pic.twitter.com/NvVnImoJ7N

“20 years Ago I was faced with a negative response from the media that still affects my career today. I was on the verge of ending my life and it is still hard to talk about it. I survived, and now this kid is the gift for my survival. What would be a good story for my show solo? Contadme.“

There had to be a very pleasant experience for Best, who was limited to running the commands you gave Luke. In fact, he himself stressed in an interview last year to the magazine Wired, which received a death threats over the Internet and that some people approach him to say: “you destroyed my childhood“. It is worth that to me, I did not like Jar Jar, but to get to those ends is completely out of place.

in Addition, Rian Johnson, director of ‘The last jedi’, and Peter Mayhew, the actor behind the unforgettable Chewbacca up ‘The awakening of the force’, wanted to show your support after open this way. I leave your message below:

[email protected] you have always been a wonderful person and I think your story needs to be heard and people are ready to hear it. Opening up publicly would be an inspiration to many.

Lots of love to you Ahmed. I think there are many of us who’d get remove alot from hearing your story.

–
The news The actor who played Jar Jar Binks confesses that he was about to commit suicide because of all the hate received was originally published in Espinof by Mikel Zorrilla.

Apple will organize a session in the Conference Game Developers this year
Apple will be hosting a session at the Game Developers Conference this yea...
Trailer for ‘Kung Fu Panda: The Paws of Destiny’, the series of Amazon in which Po is already having as a Teacher
The trilogy 'Kung Fu Panda' raised more than 1.800 million during its...
Google Play Music Special: PC und Android Betrieb
Einführung Viele kennen die Vorteile von Google Play Music, eine ganz...
Detailed the online features of The Middle-Earth: Shadows of War
You will have two modes of online gaming: Social Conquest and Vendettas.Mi...
Bibliography ►
Phoneia.com (July 5, 2018). The actor who played Jar Jar Binks confesses that he was about to commit suicide because of all the hate it received. Recovered from https://phoneia.com/en/the-actor-who-played-jar-jar-binks-confesses-that-he-was-about-to-commit-suicide-because-of-all-the-hate-it-received/

This article was published by Phoneia, originally published in English and titled "The actor who played Jar Jar Binks confesses that he was about to commit suicide because of all the hate it received", along with 18986 other articles. It is an honor for me to have you visit me and read my other writings.
◄ Scarlett Johansson responds to the controversy for his new film, ‘Rub & Tug’, where you give life to a mobster transgender
Honor Note 10: first rumors of the phablet with a screen of 6.9 inches and 6000 mAh, which would come to the end of the year ►