The Elder Scrolls: Legends shows the different races of Tamriel

. Is the card game for iOS and PC
Bethesda has given new details of the Elder Scrolls: Legends , the video game free cards for PC and mobile systems iOS , which was presented a year ago and that few months ago knew more than their gameplay.
Now its leaders reviewing the different races and factions Tamriel , which offer different weak and strong points and a unique playing style. “We wanted to create a huge game, full of strategic possibilities , and extensive The Elder Scrolls universe gave us a huge world to explore, “says Paul Dennen, creative director of Dire Wolf Digital . “When we started to give life to that world, the first thing we set was in the towns of Tamriel.”
In fact, The Elder Scrolls: Legends decks built around specific breeds can benefit from the most concrete specialization created around a single faction or race, as happens, for example, in Magic: the Gathering – because many creatures enhance and complement their own. In theory, Bethesda wants to strengthen each player is in a race his own style of game

Each race will boost two attributes, encouraging specialization of differentiating one faction decks and other

for example, Nordic promote the attributes of strength and will, while skilled Kajiitas will be most important values ​​such as Agility and will. High Elf , experts in magic, enhance their intelligence and will, as well as the Bretones do the same with the intelligence and strength. Red Guards make collection Force Intelligence, and the Argonians , Agility and Strength.
Finally, the Imperial stand out with His Will and resistance, as well as the Dark Elf teem Intelligence and Agility, and Orcs , strength and endurance. For its part, the Wood Elves offer in their letters and Agility Force
The Elder Scrolls: Legends propose we play with cards based on characters, creatures, gods and universe of the series title role. Your mechanics and game design can enjoy games both quick and long lasting and very strategic , being accessible to players of all ages and levels, something that will help the varieties of deck available 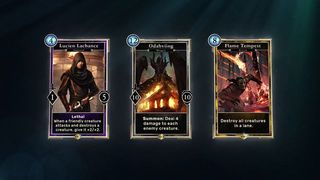 The Elder Scrolls: Legends shows the different races of Tamriel
Source: english
May 31, 2016