Google has been including a huge number of new features in the latest versions of Android, many addressed to eliminate the gap that exists between using a desktop device and one mobile. Given that the telephone is increasingly used as the sole device connected to the Internet, it is logical that almost we can do with it what same as with a computer. The desktop mode Android 10 is an example, also one of the latest news related to the system: the ability to copy images.

The ‘copy/paste’ was a clear reason for differentiation in the early days of Android, but not evolved too much since then. We can copy any text, for the longest, and then paste it in another application that includes insertion of words; on the contrary that the images, a usual choice in computers. And if we learned about the plans of Google for integrate order copying photos, touched to know how you could stick the content. The latest version of Gboard has the key, 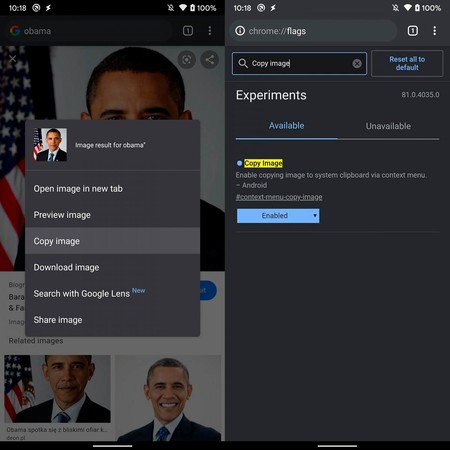 Copied from photos in Chrome for Android. Image from XDA Developers

Such as has corroborated XDA Developers, the latest version of keyboard Google has launched a novelty in the code is not yet active: the above mentioned paste of images. And is not active for the simple reason that even you can’t copy photos, so that will be something that can be done from the Android keyboard easily.

Gboard: 38 tricks and features to get the most out of the keyboard to Google mobile

If Android was preparing to expand the horizons of the clipboard, Gboard will act accordingly. After in-depth analysis of the application code from Google, XDA Developers have discovered the lines that make reference to the option to paste in photographs. Does not involve too much complication: once the image is on the clipboard, Gboard will be able to access it and paste it in a compatible app. Now, of time the option will not be suitable for all applications, only an initial list of them will allow you to:

This is an initial list, but am surprised that Telegram is not included between social networking applications and messaging chosen by Google. Still have to wait to see the copied images as this can only be activated via a ‘flag’ or line of development to attribute values. However, Google plans to add it in the future, once you standardize the new features of the clipboard in Android. For more copying and pasting images seem just a little bit useful on a mobile, it is essential for those who wish to get their phone replace completely the computer.

–
The news The keyboard Google is preparing to paste images from the clipboard into other applications was originally published in Xataka Android by Ivan Linares .