The Last of Us Part II: How do the weapon upgrades and skills

The game bet by an experience much more customizable and detailed with Ellie embedding to hand the improvements in the weapons.

Even after the presentation in Los Angeles, in which pudimos play, and the new trailer, there is still much to show in the next few months of . We had the co-director of the game Anthony Newman during an interview with Vandal.

“In terms of mechanics, there are many objects of manufacture that we have not revealed and new skills that we haven’t shown.”. What they have taught and we have been able to try has been the new system of upgrades for both arms, as well as skills.

On the same line as the rest of sections, these systems have become more complete and better. The base remains that of the original game: you collect tools to improve the weapons and capsules in the case of the skills. From that point, with the additions implemented by Naughty Dog, is offering large amount of options to the player, quite distinct and with a lot of variety.

as for the weapons again, renewed, the system tables work. “We have deepened much to make improvements are really something physical that is coupled to arms, instead of just being an improvement of stability or accuracy. You are adding, for example, a compensator, which changes the handling and the look of the gun,” says Newman, who adds that, instead of multiple versions of a same improvement (each more powerful than the previous), each added to a weapon is “something big that has an effect much more important in the game”.

In this way weapons suffer a change to the playable level and also on a visual level. In fact, you can see an incredible level of detail, such as after choose to enhance a weapon, Ellie lifts her up, attached the new piece, and even used his knife to Polish it in some detail. Not without after passing a rag to clean it. A system of crafteo’ very worked, of course, is appreciable also when it enters combat.

In the case of the rifle we can add or improve on the cylinder head, the charger, the sight or even the gun. To the gun you can put a new firing pin, a compensator, another charger or change the cylinder head. Other weapons such as the shotgun allow you to increase the rate of fire, stability, or the ability of the ammunition.

“The improvements to Ellie allow many options to customize the strategy,” says Newman talked about the skills. “Not only are improvements in terms of numbers, as it can be to move faster or have more health. Are new skills you learn how to be able to hold your breath while you aim or be able to make two objects using the same resources. Things that can have an extreme effect”.

These skills are divided, until what we could see, four branches. Some of them are unlocked as you find one object in the game. In the case of the section that we test ourselves, we found a magazine that allowed to unlock a skill of ‘accuracy’. In addition to this, we were able to see the branches of ‘survival’, ‘manufacturing’ and ‘stealth’.

All of this results in Ellie that will evolve as the player. In Newman’s words, ‘these two types of improvements states create new synergies and strategies for the player”. It only remains to know if Ellie, finally, you will learn how to swim.

The Last of Us-Part II goes on sale the next February 21 as exclusive to PlayStation 4. From this link you can learn all the details about the purchase options, including the various editions that come on the market. 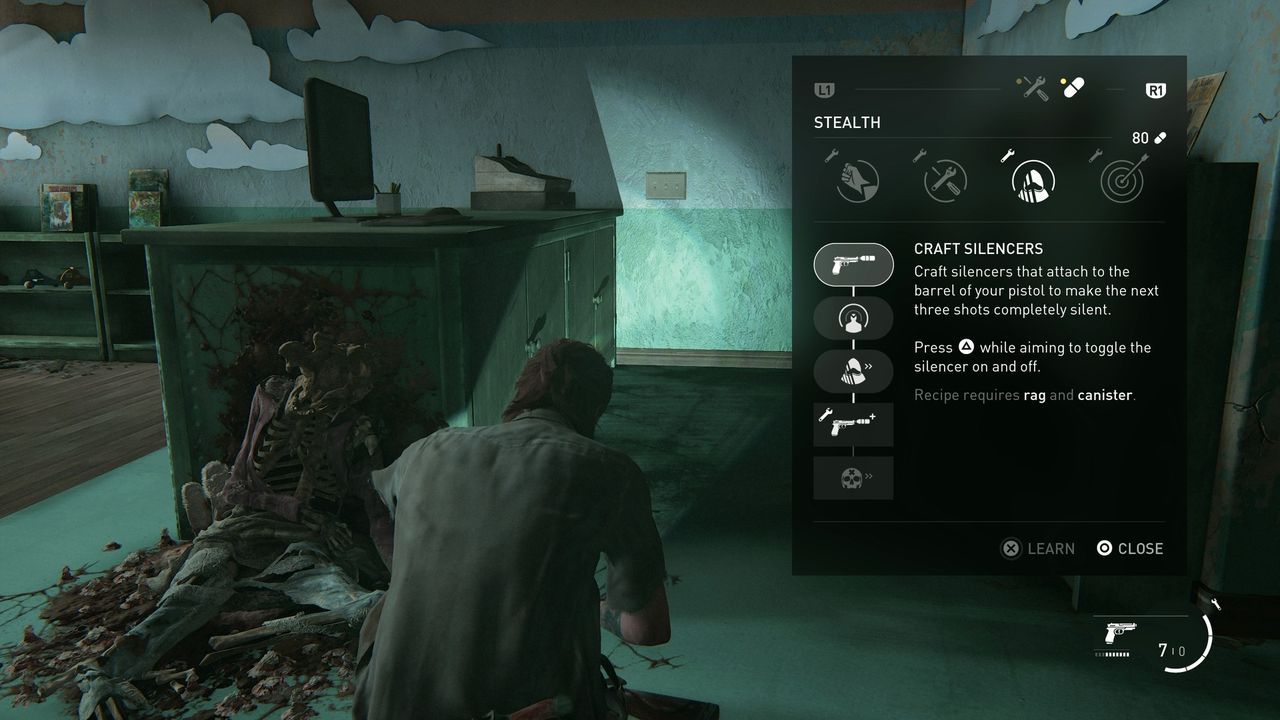 The Last of Us Part II: How do the weapon upgrades and skills
Source: english
September 28, 2019