The latest leaks leave the Samsung Galaxy S10 Plus the discovered

it Has been thanks to a few “assumptions” renders official press where we have seen the Samsung Galaxy S10 Plus in all its splendor, and match pictures already announced a few weeks ago 91mobiles next to Onkeaks, known for its accurate leaks in the mobile sector. And what do we see in them? At a glance, double hole on the screen, and three cameras in the rear of the mobile, but there is much more.

The hole in the screen extends to Samsung phones, and after seeing it in the Samsung Galaxy A8s, known as Galaxy A9 Pro in the international market, it is the turn of Samsung Galaxy S10 Plus, where we see not one, but two holes for integrating the two front-facing cameras of 8 MP + 5 MP.

With this design of display, dubbed as Infinity Or by the south koreans, is achieved, reduce the bezels of the phone, getting a front of 6,4 inches. Without confirmed data, is expected to have a Super AMOLED with a resolution QHD+.

The render also gives a lot of information of what will be the back of the phone. It can be observed in three cameras with LED flash. Though there was talk of that could integrate four, the filtered image by 91mobiles leaves the number three that will be located in a horizontal position and which may be of 16 MP +16 MP + 13 MP.

ultrasonic Sensor under the screen 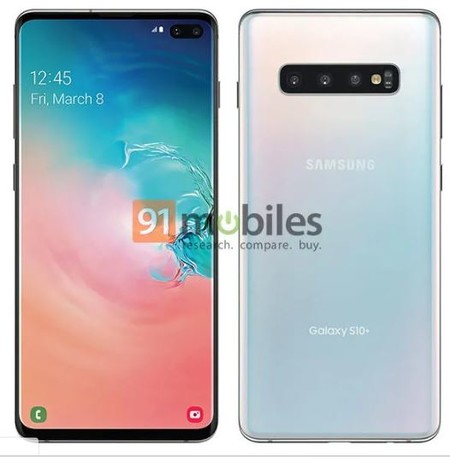 But the absences are also noteworthy. It is the case of the finger sensor, which does not appear in the rear of the mobile phone. This makes me think that could confirmed the rumors and Samsung could debut the long-awaited sensor fingerprint under the screen in the new Galaxy S10.

This sensor would be ultrasónicowith greater precision than the optical, and, therefore, more safe at the time of detecting fingerprints. It will not be the only sensor that will have the phone, which is expected to come with scanning iris for the face unlock.

we Tested the fingerprint reader integrated in the display: to tremble, Face ID, and the readers in the rear

it renders the mobile final, the Samsung Galaxy S10 Plus could arrive in new colors, as is the case of the gradient, and is expected to be christened as “Prism White”.

The phone would come with chip Snapdragon 855 or Exynos 9820 SoC, according to the region, accompanied by 6 GB of RAM

beyond the images themselves, it is expected that the phone comes with two different processors depending on region: the Snapdragon 855 or Exynos 9820 SoC that will be accompanied by 6 GB of RAM. In terms of storage, the company could debut the long-awaited 1TB of capacity in the Samsung Galaxy S10 Plus, although it is still a mystery.

The battery would be 4,000 mAh with fast charging, while that the phone would be with Android 9 Foot. The images do not allow to check if the phone will still have the headphone jack, but according to leaks, is expected to do, and go at the bottom next to the USB port-C.

The fingerprint reader beneath the screen you will come to the mid-range Samsung with the Galaxy A10, according to rumors

New rumors of the Samsung Galaxy S10 Lite: it will be called Galaxy 10 and it will have fingerprint reader on the screen

–
The news The latest leaks leave the Samsung Galaxy S10 Plus uncovered was originally published in Xataka Android by Brenda Macias .