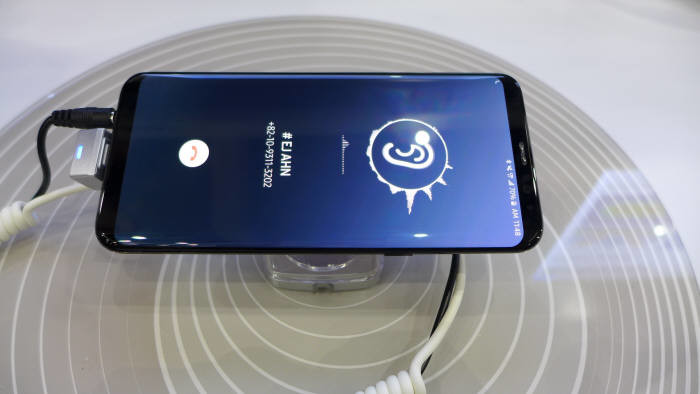 After months of rumores, it seems that the Samsung Galaxy Note 10 already has a date for submission: without official confirmation, everything suggests that the next 7 August we will see the new high end of the company, after the Galaxy S10 the first half of the year and to lack of knowing the Galaxy Fold, a victim of the delays by the problems in the screen. Leaks about the Note 10 not missing, and now everything points to that could count with built-in speakers on the screen.

The Galaxy Note 10 not come only and, for the first time, we could see up to four models as the standard was to be added to the Note 10 Pro, the Note 10 5G and the Note 10 Pro 5G. Little by little, the leaks are exposing your specifications, as that could include a front-facing camera, perforated and rear quad or dispense with the minijack.

Note 10's "chin" is very narrow, the same level as the iPhone, not the speaker grooves on the forehead, which means that the flagship Sound on Display(SoD) technology will replace the traditional speaker. The forehead will be narrower. pic.twitter.com/6aRGQIG0ee

The last filtration comes from the hand of Ice Universe, well-known leaker of the sector, which ensures that the Samsung Galaxy Note 10 will have speakers under the screen (Sound on Display). Ice Universe, is based on leaks of a screen protector that lack of slots for the speaker, what makes you think that the speaker would be embedded in the screen.

So, these settings would allow Samsung to offer a diagonal screen size greater without the need to increase the size of the device itself. In fact, it is expected that the Galaxy Note 10 has a screen of 6.3 inches, which would go up to 6.75 inch in the case of the Note 10 Pro.

Screens sound, a new resource to avoid the ‘notch’ and increase the surface area of screen

Samsung takes time working on this technology. In fact, the showed for the first time in the Samsung OLED Forum of China of the past year, as well as at CES in Las Vegas at the beginning of 2019, so that everything seemed to indicate that would lead to any of your phones throughout this year, as it seems that this will happen on the Galaxy Note 10. Other manufacturers such as LG have already introduced in the LG G8 ThinQ in what they have called Crystal Sound OLED.

For now, it is a leak, so we’ll have to wait for the next, August 7, to see there any truth in these rumors, and if the Samsung Galaxy Note 10 has the speakers integrated in the screen or not.

Samsung will present the Galaxy M40 on the 11th of June: this is what we know of him

Samsung Galaxy M40: the largest of the family arrives with hole in screen Infinity-Or and speaker under the panel

–
The news The latest leaks suggest that the Samsung Galaxy Note 10 will have the speaker under the screen was originally published in Xataka Android by Brenda Macias .