The NBA fills their stadiums empty with a chilling public virtual

After the break for coronavirus the NBA has become without spectators in the stands. The fans have been replaced by a video call on a large scale.

The NBA has come back after the forced break by the global pandemic of COVID-19, and has done so as the majority of the events of mass: without an audience. Following the line of other sporting competitions, the league of american basketball has used digital systems to add public virtual the first match, which took place last night. The result is a both strange and acartonados attending the meeting have become in the flesh meme.

The curious system of the NBA is that each person can download a mobile application to view the game from his home while recording to display his face in public in retransmission actual match. These faces also represent the large screens that are within one’s own field and to see him on television, you see a field full of virtual people who cheer for your team.

A strange but original way of filling in the empty fields

Perhaps the idea is not all bad, but the execution leaves a little to be desired. Given the technical limitations of each individual and the specific characteristics of be shooting from home there are virtually no two shots are the same, so that some appear pretty bigger than the other, or to some they are seen through the body while others are all head. It doesn’t help that the connection of each person to go at a different speed and never at the same rate of frames per second to play basketballers.

Although the results leave to be desired, it is curious to see how the sporting competitions of the elite are taking advantage of the technical advances of the video game to replace. On this occasion, has been a Microsoft technology not related to video games which has allowed the integration of the virtual public in a real match, but in the other competitions, as in the Premier League, you have used assets FIFA 20 to simulate a field full of fans. 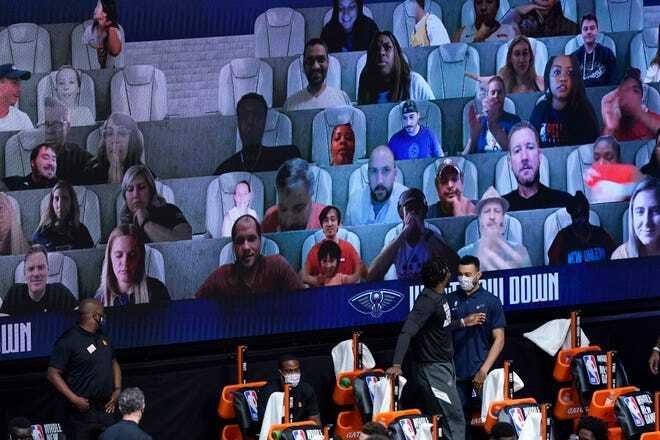