The symbol of the stairs in the Cathedral of Notre Dame

Alchemy is reflected in the marvelous cathedrals. To better understand inescapable duty is reading the book: The Mystery of the Cathedrals, Fulcanelli, where edge approaches to reveal the secret of the stone filolosofal.

But, well, for now full transmit an excerpt that I liked, from alchemy-rosacruz.blogspot.com about the symbolism of the ladder. This is a man on a throne sendado, circled it in his hand two books: the book closed and open book, with a stick and a ladder putting in front of nine steps. 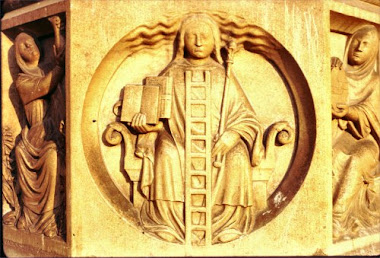 This image can be found in the Notre Dame in France and was Fulcanelli who we found out what it really meant.
• The head of the figure is over the mountain, symbol of the rise of knowledge. At the same time, in the cloud converges the circle is not simply the ouroboros of alchemy, the beginning and the end. While the conversion of man (phallus, I) and the circle (female, 0) form the beginning of the Sun, IO, sexual union of man and woman, that is the key …. and the secret of all powers.
• Sitting on a throne and in his left hand a scepter, representing the power that is vested in the king or magician or alchemist, who is none other than the rise of transmuted sexual energy at pineal gland, which as you will see this with two petals (representing pingala round, like the sides of the throne where sitting), total pineal gland (which is deposited kundalini, love) are the three forces, the Rosicrucian
• In his right hand two books, an open, representing science, and a closed, representing the occult.
• The staircase as a symbol of patience, the essence and the basic principle of any alchemist whose objective is achieve the Great Work and is none other than the spine _la Jacob’s Ladder (that comes from the earth to the heavens). With 9 rungs representing 9 initiations (minor fire and light) 9 represents essentially the alchemical transmutation.

The symbol of the stairs in the Cathedral of Notre Dame
Source: english
July 6, 2013