The trailer of ‘Happy!’ presents a fun and strange twist to the imaginary friends 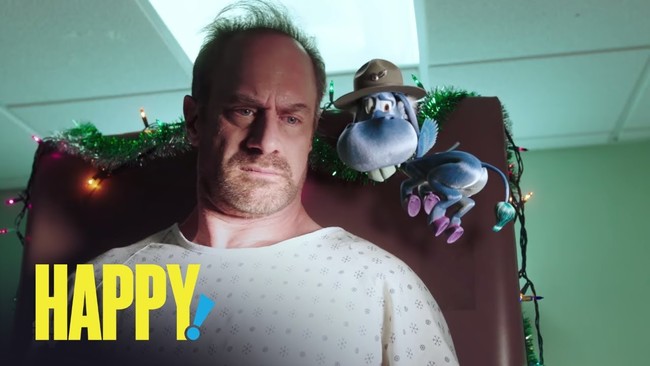 a Few chains have so many interesting projects in the pipeline, especially for fans of genres fantastic, SyFy. After a time it seemed that up to the network more normalica them ahead in their own field, in this last couple of years are putting the batteries with the vein of the adaptations… for very crazy ideas that you have. This is the case of ‘Happy!’ the new series from SyFy of which we already have a trailer.

Based on the comic of the always interesting Grant Morrison (‘The Patrol Convicted‘), and with the drawing of Darrick Robertson (‘The boys’), ‘Happy!’ is the story of Nick Sax (Christopher Meloni), a former police officer turned thug whose life is made a piece of shit. After being shot you will learn to Happy!, the imaginary friend of an abducted child who will come to him to try to save her.

It’s funny how different it looks ‘Happy!’ in relation to the rest of the programming because no of the channel but of television in general. It is not that unique, but it does have aspect of the series has little to do with the typical image of SyFy with your police action and humor-something adult. I acknowledge that I have pending on the original comic, released by Panini in Spain, but has a pintaza.

SyFy premiere of ‘Happy!’ the December 6.

Releases of the week | October 10

it’s official: 'Krypton', the prequel to Superman, receives a green light and we have the first official image

–
The news The trailer of ‘Happy!’presents a fun and strange twist to the imaginary friends was originally published in Espinof by Albertini .