The Wachowski prepare the return of the series ‘Matrix’, according to the director of ‘John Wick 3’

There’s new information on the back of ‘Matrix’! In 2017 we recovered the conversation on a fourth delivery following declaraciones Keanu Reeves in which he said that he would interpret to Neo if the sisters Wachowski were at the helm. Shortly after it was learned that Warner was barajando the option of a reboot without Reeves or the Wachowski.

20 years of ‘Matrix’: 20 influences and ingredients that gave shape to the masterpiece of the Wachowski

Before the rumors of a possible remake, the screenwriter chosen by Warner, Zak Penn, clarified the project was not intended to redo the story already told, but expand the universe with new characters; that is to say, a spin-off that work, reboot to relaunch the franchise. Now, two years later, and when it marks the 20th anniversary of the original, we learn from a entrevista Chad Stahelski, director of ‘John Wick 3’, actually ‘Matrix 4’ is underway and with the Wachowski aboard.

“I Am very glad that the Wachowskis are not just doing a ‘Matrix’ but that they are expanding on what we all love,” said Stahelski, who takes the opportunity to return to be offered as a specialist of action scenes (already assisted in the trilogy of science-fiction and, in fact, was the double for Reeves in scenes of risk), but would accept what I asked: “I would stop whatever he was doing for them.” 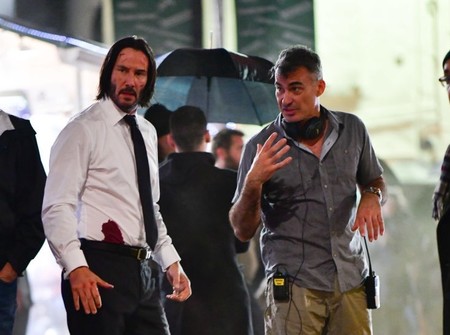 When they ask if you have more details on the involvement of the Wachowski, whether it will be behind the cameras, the filmmaker responds with questions: “I’m Not sure about the set. the I’m Not sure that Lana will get to do it“. Remember that Lana Wachowski has been busy with the series ‘Sense8’ and the last thing she did in the film, with her sister Lilly Wachowski, was a commercial failure, ‘The fate of Jupiter‘ (‘Jupiter Ascending’, 2015).

Keanu Reeves confirms: that you have with him for ‘Matrix 4’

Next to Chad Stahelski was the protagonist of the two franchises involved, ‘Matrix’, and ‘John Wick’, Keanu Reeves, and the interviewer could not avoid asking him if he is still willing to restore the role of Neo, in the event that the Wachowski ask it to do so. “it Would be a gift. I wouldn’t say no to that,” replied the actor. Now we just need Warner and the Wachowski agree…

'John Wick 3' you already have official title: Keanu Reeves warns that we’re ready for the war

10 years of 'Speed Racer', the masterpiece misunderstood of the sisters Wachowski

–
The news The Wachowski prepare the return of the series ‘Matrix’, according to the director of ‘John Wick 3’ was originally published in Espinof by Juan Luis Caviaro .