The Xiaomi Black Shark 2 is left to see with 12GB of RAM and Android Foot-to-board
Despite the fact that there are not too many devices in circulation, the niche of mobile 'gaming' which opened ...

Despite the fact that there are not too many devices in circulation, the niche of mobile ‘gaming’ which opened the Razer Phone seems to follow its course, and we already have a renewal on the table. Razer launched its Razer Phone 2, and the own Xiaomi did the same thing with a Black Shark Helo that was not a great leap forward with regard to your predecessor. Something that it seems that I see with the Black Shark 2.

The mobile has left to see on any previous occasion and there are some data that we believed that would be reality when it is presented, as is the fact mount the Snapdragon 855 Qualcomm, we’ll see if with 5G or without him. But the last filtration comes to us from a gift from Geekbench. The well-known benchmark has shown something of the power future of this Black Shark 2, and it promises to be a telephone when off-roading.

► Qualcomm, the technology giant in the back of your smartphone and that you still don’t know it Is likely that your mobile phone works th...
► Google already allows you to do a manual backup of your device in the cloud with ADB, we tell you how At the beginning of the last month of Au...
► LEGO Batman 3: Beyond Gotham comes to iOS and Android Adapts the adventure of Batman and company. ...

Xiaomi Black Shark, analysis: Xiaomi tries to a more for less also among the smartphones to play 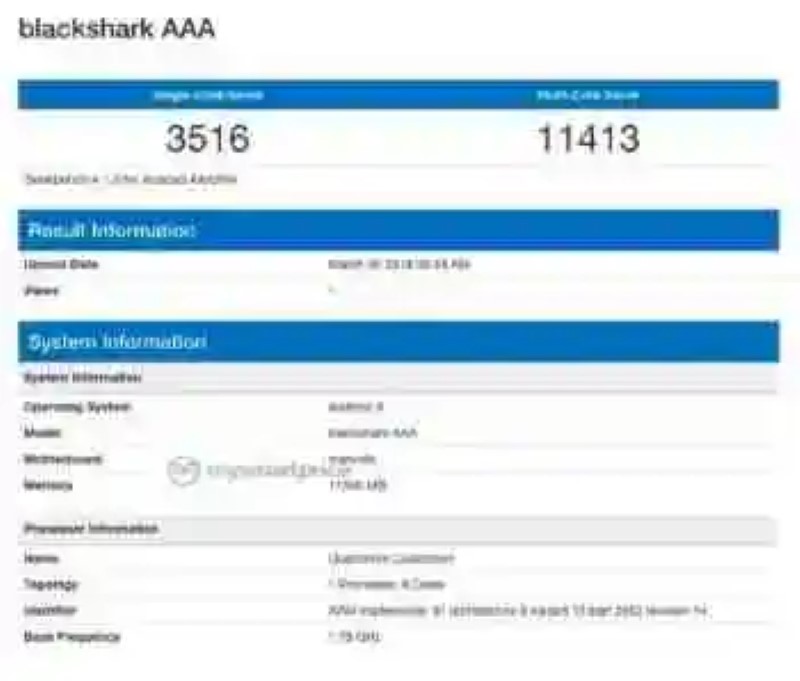 There is still no arrival date for this Xiaomi Black Shark 2, but it makes one think that the release should not be delayed too much. The last thing that comes to us what makes from Geekbench, where the phone has been tested and from where has now been uncovered. A performance test that sheds light on some of the model data.

The first, which we already knew. The Xiaomi Black Shark 2 mounts the Snapdragon 855 Qualcomm, we don’t yet know if the modem Snapdragon X50 with 5G or not, something that will be revealed when the day of the presentation. The second, the phone is being tested with Android Foot, which we assume will arrive hidden behind the layer of customization MIUI from the chinese manufacturer.

And third, that the line Black Shark will give a good leap forward in terms of memories, since the model tested in Geekbench is featured wearing 12GB of RAM. A figure that would be located next to the terminal most powerful in the market this sense, although we don’t yet know if, as a top model or as a model base for Black Shark 2.

it Is rumored that the Black Shark 2 will count with a new cooling system called Liquid Cool 3.0, but neither has it been a fact confirmed to date. Of time we were waiting to go to receive more information about this Black Shark 2 that looks better every time, although initially it seemed that would not be a very significant step forward.

Xiaomi has patented a mobile phone, which is curved toward the four sides and is ‘all screen’

–
the.news The Xiaomi Black Shark 2 is left to see with 12GB of RAM and Android Foot-to-board originally.published.in by Samuel Fernandez.

Cannes 2019: ‘Portrait of a Lady on Fire’ and ‘Matthias et Maxime’ approach to the belt with two romances contained emotion
Céline Sciamma and Xavier Dolan we come to the Golden Palm of emotions ...
Moovit 3.0: all information and public transport routes on your Android
public transport is the companion of many of us every day. Whether to...
ThinkPad X1 Fold and Yoga 5G, bets Lenovo by the folding screen and the 5G
Devices with folding screen and the focus in the 5G, are two of the trends...
From Hulk Hogan to The Rock: the titans of the wrestling that ended up in the film
With Dwayne Johnson become superstar globally, is officially considered c...
Bibliography ►
Phoneia.com (March 7, 2019). The Xiaomi Black Shark 2 is left to see with 12GB of RAM and Android Foot-to-board. Recovered from https://phoneia.com/en/the-xiaomi-black-shark-2-is-left-to-see-with-12gb-of-ram-and-android-foot-to-board/

This article was published by Phoneia, originally published in English and titled "The Xiaomi Black Shark 2 is left to see with 12GB of RAM and Android Foot-to-board", along with 18989 other articles. It is an honor for me to have you visit me and read my other writings.
◄ The Redmi 7 is filtered in a big way, showing their appearance and some specifications
So it will be the cover of Shenmue III ►