The Xiaomi Mi Mix prepares for its third flash sale

At the end of last October, Xiaomi we surprised with the Xiaomi Mi Mix, a device that quickly became the smartphone that everyone was talking about. Your design made in ceramics, with mark barely noticeable around your huge screen of 6.4 inches not gone unnoticed and at the moment, but their production is limited, sales are performing well.

Little more than a month since its launch, the manufacturer has announced the third flash sale of the Xiaomi Mi Mix which will take place tomorrow through the official website of the company. However, for the time being will remain an exclusive to China.

Xiaomi is using the formula of flash sales with your smartphone without edges, and the first two have gone very well, so it is expected that this third follow the same path. The first time managed to deplete My Mix in just ten seconds and the second time is lengthened to 30 seconds, but yeah, in none of the two cases they said how many units they had for sale.

however, the company Hugo Barra has already warned that the Xiaomi Mi Mix does not allow the mass production, mainly due to its construction, ceramic -, and therefore it would not be possible to launch large amounts at one time. Specifically, Xiaomi has limited the production to 10,000 units monthly, although we insist they have not offered specific data in their latest flash sale. 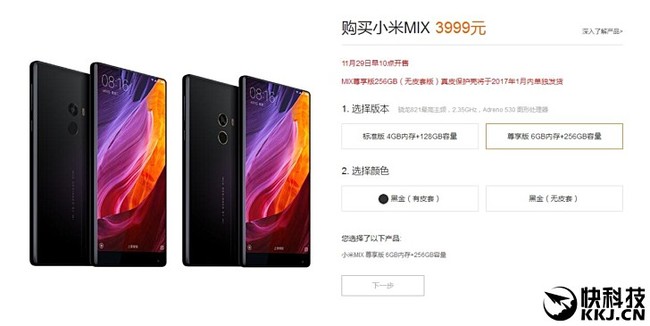 we refresh the memory. The Xiaomi Mi Mix comes in two editions, with a basic account with 4 GB of RAM and 128 GB and more completed with 6 GB of RAM and 256 GB, which also offers details in 18 carat gold. Outside of these differences, they share all other features as the screen size of 6.4-inch, Snapdragon processor 821, or the camera of 16 megapixel with lens f/2.0.

The price of both versions remains unchanged since its launch, with 475 euros for the base model, and 543 euros for the version 18K. As we said, the sale will be made through the chinese web company tomorrow, Tuesday the 29th of November.

Via | GSMarena
More information | Xiaomi
Xataka | My Mix is the phone of the future with which to surprise us Xiaomi and Philippe Starck: 6,4 inches no frames

–
The news The Xiaomi Mi Mix prepares for its third flash sale was originally published in Xataka Android by Amparo Babiloni .