There will be Madrid Games Week 2016, but Barcelona Games World

It will be held from 6 to 9 October.
As I have informed about minutes ago, the Spanish Association of Video Games (AEVI) has announced a new show dedicated to video games to take place between 6 and on October 9 at the fairgrounds of Montjuïc of Fira de Barcelona.
This new event, called Barcelona Games World, replace the Madrid Games Week the fair celebrated national games coming in recent years in the capital of Spain, so this latest edition will not have 2016 , even though earlier this year announced it to be held at IFEMA during the same dates Catalan event.
During the 2015 edition, Madrid Games Week beat his record of visitors and managed to reach the 92,524 attendees , a figure representing an increase of 68% compared to the results of 2014, still well above the most optimistic expectations of the organization.

the reasons for this change has been made fair and region have not transpired yet, so will keep you updated as we get more information . 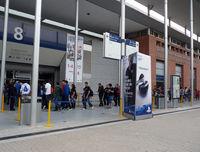